147-year-old shipwreck discovered off the coast of Washington

The crash, and subsequent sinking of the S.S. Pacific in November of 1875 pre-dates Washington’s statehood. The crash—one of, if not the deadliest disasters off the Pacific Northwest coast—claimed more than 300 lives.

SEATTLE - The crash and subsequent sinking of the S.S. Pacific in Nov. 1875 pre-dates Washington’s statehood. The crash—one of, if not the deadliest disaster off the Pacific Northwest coast—claimed more than 300 lives.

Miraculously, two people survived the wreck. Those survivors beat incredible odds. According to records, they clung to wreckage for more than a day before they were rescued. The lifeboats that were on the ship were inoperable; they had been filled with water to balance the ship, which used large paddle wheels powered by the steam engine.

Henry F. Jelly, one of the survivors, told the Daily British Colonist he was lying in bed when another ship collided with the Pacific. He recalled a terrifying tale of chaos as the ship was sinking with no one behind the ship’s wheel—passengers were crying, including a woman whose child had been killed during the panic of passengers trying to get off the ship.

While the overall death toll makes the Pacific’s sinking historic, its importance extends beyond the numbers.

The Pacific had left Olympia early in the morning of Nov. 4, made a number of stops and picked up several prominent and wealthy passengers.

There has long been belief that gold was aboard, given the passengers—and those passengers’ connection to the Cassiar gold rush—a gold rush that led to more than a million dollars’ worth of gold coming out of the region in the 1870s, a part of history that’s often forgotten.

While the ship’s history and potential treasures have led many to search for the ship, the people behind the find seem more interested in the history itself than the treasures.

Jeff Hummel, part of Rockfish Inc., the people who discovered the shipwreck, has a long history of searching for sunken artifacts. He and his partner Matt McCauley are locals—the pair made headlines in the 80s when the then-students discovered a World War II dive bomber in Lake Washington.

Searching for sunken treasure and diving into history books became a passion, and a hobby.

Hummel was tapped by a group to search for the S.S. Pacific because of their publicized dive bomber find, but after a team sunk countless hours and money into finding the ship, the work dried up. Hummel rallied another team, but eventually that quest ended, too.

This latest effort was different. A group of more than 25 people donated their time in a shared dream of finding the S.S. Pacific.

A larger group of 40-plus people helped fund the work, which Hummel estimates has pushed north of $2 million when accounting the hours of labor.

Despite the high price tag, that is a relatively small number in terms of searching for a sunken ship. The local team, which goes by the name Rockfish Inc. and runs alongside a non-profit named Northwest Shipwreck Alliance, has been able to run on a shoestring budget by creating much of the equipment they use.

Falcor and Draco, the two remotely-operated vehicles (ROVs) the team created, are made with a combination of parts they’ve made and over-the-counter items they’ve modified to survive the depths at which they were required to dive to find the ship.

The ROVs took side-scan sonar images that were later confirmed through optical cameras, which allowed the team to identify the ship.

The exact location hasn’t been publicly released, but court documents required the company to give a general location in order to restrict other would-be salvage operations from jumping in on their find. The ship came to rest off the coast of Washington roughly 40 miles south of Cape Flattery, and 23 miles offshore. 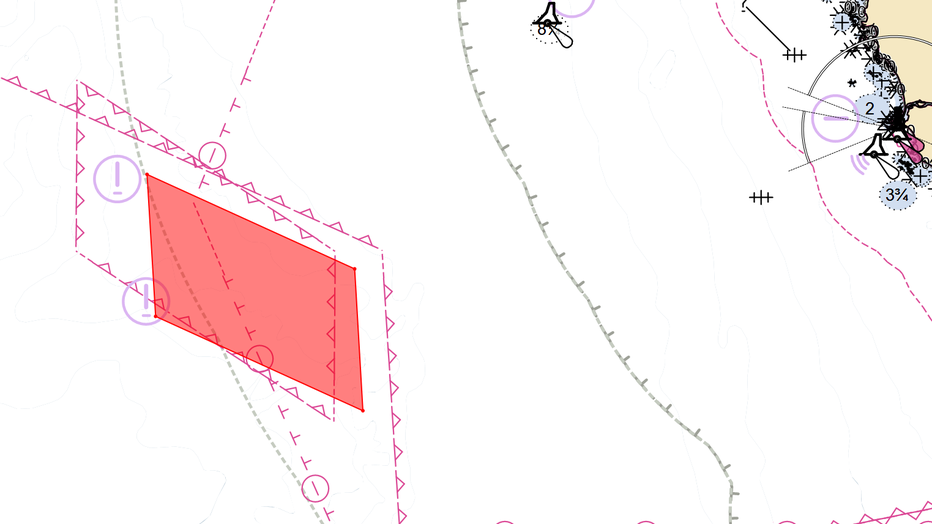 The highlighted area is the exclusion area created by a Federal court order -- the shipwreck site is within the noted area at a depth between 1,000 and 3,000 meters beneath the surface.

The team was able to find the location by identifying coal that local fishermen had netted while trawling fish. That find, paired with decades of archival research, allowed the team to pinpoint an area to search. Still, Hummel said the location was near the boundary of the area they searched.

The find was difficult for a number of reasons, including the fact that a 100-year storm hit at the same time the ship went down in 1875.

Hummel told FOX 13 that other groups that searched the area had even missed evidence on the seafloor somewhere between 1,000 and 3,000 feet below the water.

"It looks so different than anyone ever expected," he explained. "Initially, it looks like the wrong size, shape and everything. You slowly work through using the robots, imaging things and looking at it that eventually we realized: ‘Oh wait, that is the ship.’ It took a while."

The next step involves the recovery of the items on-board, and the ship itself. That work will begin in 2023 or 2024.

RELATED: ‘New to science’: At least 2 minerals discovered in meteorite that crashed in Somalia

According to Hummel, this has the potential to be a "world-class find," based on the initial information they’ve recovered. He believes it’s likely they could find anything from wine bottles with the corks still intact, to clothing made of leather or wool.

However, the real find for Hummel are the unknown mysteries: including whether the ship’s boiler exploded. He’s also hoping to understand more about the 300+ souls that went down with the ship – after decades of archival research he’s learned more about those people, and his hope is that this find will allow those stories to be brought to light.

In the meantime, the group’s nonprofit arm has plans to open-source the tech they’ve created in hopes of preparing other crews for similar finds without the high costs that are typically associated with these types of finds. Hummel has even hinted that they’ve made an additional discovery that will be shared at a later date.