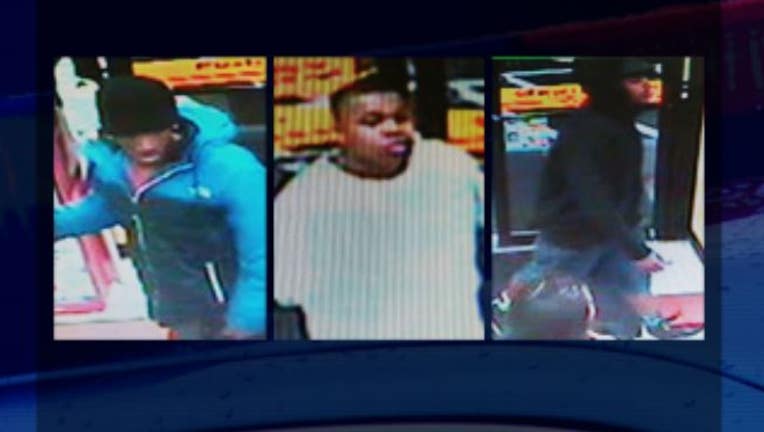 WANTED IN FIFE -- Fife police need you to take a good look at three bold beer bandits. Detectives say they went on a wild suds-stealing crime spree last Saturday night -- targeting two gas stations across the street from each other and hitting the first one twice. Worst of all though is detectives say their second heist turned violent against a clerk. "They went into one of the gas stations here in town and what you see is you see them kind of walking around inside they go to the beer cooler,” says Fife Police Det. Sgt. Tom Thompson. “They all grab cans of beer and you see them kind of start handing them off to each other and what happens on that one is they pretty much run out the front door. The clerk in that one he tries to stop them, but doesn't really engage them, they get away with the beer. About two hours later they return to the area and they end up at a gas station which is just across the street from the initial location and in this one it's the same situation. One of them goes inside, the others are outside in the parking lot and what he does is go in, steals the same type of beer and he runs outside the door. Well, the clerk at this location, he comes around the counter and he chases them outside and what happens outside is the clerk's yelling at them to stop and one of them does stop, turns around and throws one of the cans of beer at the clerk and it hits him in the chest. Well, the clerk, he's angry about what's going on, he picks up the can of beer and he throws it back at them and hits one of them which angers them, they all stop and now they proceed to assault the clerk and he's beat up pretty bad, he needs to get medical attention.”

You'd think that was enough chaos for the crew of crooks -- but it wasn't -- detectives say a couple hours later they came back to the first gas station they hit, all while a detective was still on the scene at their assault across the street. They stole more beer and took off again -- this time for good. If you can tell Fife Police any of their names, call an anonymous tip into: CRIME STOPPERS: 1-800-222-TIPS You must call the Crime Stoppers hotline with your tip to be eligible to receive a cash reward for information leading to a fugitive’s arrest. CLICK HERE for information on how to TEXT A TIP to Crime Stoppers