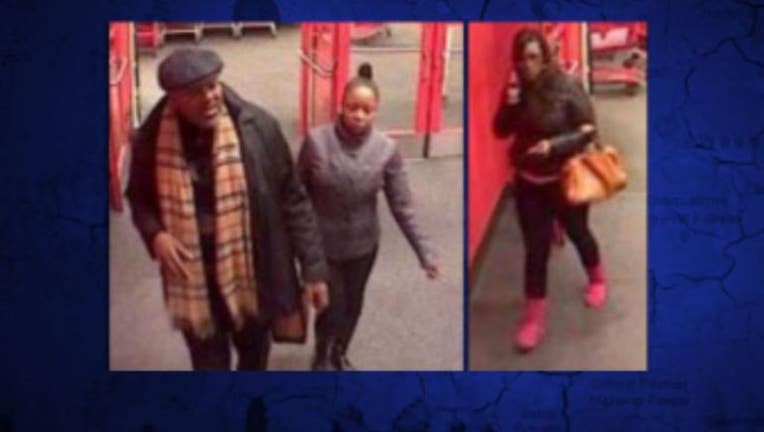 Two weeks ago, we featured these three accused thieves police say stole a Kent woman's wallet in a crowded Seattle restaurant. Tonight, they're still unidentified, and now the victim is talking to let others know this kind of crime can happen anywhere. Take a close look at this couple walking into the West Seattle Target.

Seattle detectives say they were about to try to use a credit card they'd just swiped from a woman's wallet. It happened here at the Japonessa Restaurant in downtown Seattle. The victim was this woman; her name is Kathy. "I had this purse on my shoulder like this. However, the zipper was facing outward. So this gentleman came up from behind me, bumped into me really hard once and I didn't think anything of it because it was really crowded.  It was Happy Hour time so everyone was literally shoulder to shoulder," Kathy said. But then, Kathy says, the man bumped into her again. "That's when I noticed his scarf was hovering over my straps so I thought he was trying to get access to the scarf so I leaned forward to let him do that, not knowing at that time he was using that as a cover to stick his hand in my purse and steal my wallet." Even before Kathy could get back home, her credit card companies called and notified her that it appeared she was the victim of fraud. "During the time she discovered her wallet was missing and making a police report, we have several instances where the suspects who took the wallet went out and tried to make purchases," said Myrle Carner of Crime Stoppers of Puget Sound. In fact, the thieves bought more than $3,000 in merchandise from two big box stores. "Now I'm way more cautious if someone bumps into me," Kathy said. " I'm way more aware of my surroundings." Already victimized once, Kathy has another concern -- identity theft -- and she has advice for other women. "Ladies just keep your purse tight to you, and if someone bumps into you, immediately check your purse to see if someone stole something out of it," Kathy said. If you recognize any of these accused wallet thieves, call an anonymous tip into: CRIME STOPPERS: 1-800-222-TIPS You must call the Crime Stoppers hotline with your tip to be eligible to receive a cash reward for information leading to a fugitive’s arrest. CLICK HERE for information on how to TEXT A TIP to Crime Stoppers