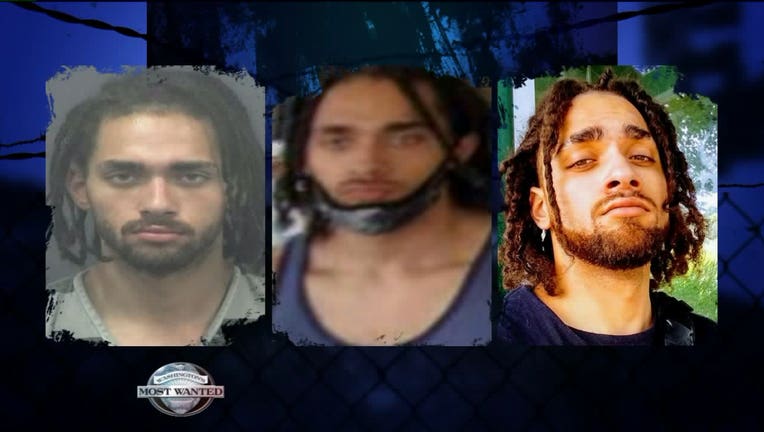 CAPTURE UPDATE December 22, 2020 -- - Christopher King was arrested and booked into the SCORE jail in Des Moines on December 5th.

----Original story-----
FUGITIVE WANTED August 21, 2020 --
A warning to everyone who owns, or works in a jewelry store to keep a lookout for wanted convicted felon, Christopher Allen King.

Detectives from Seattle to Tukwila to Tacoma say King's behavior appears to be escalating from a necklace snatch to two smash-and-grab jewelry thefts and then an armed robbery earlier this month.

Now, they're are asking for your help to find him.

Seattle Police say surveillance video from Wyatt's Jewelers at Westwood Village in West Seattle shows two men inside Lauren Wiggins’ store. "They were pretending like they were looking for a gift, so one of them was saying he was looking for a gift for his girlfriend. He distracted our sales staff, got her over on this side of the store," Wiggins described.

She says that's when the second guy, who detectives say they have identified as King, took out a tool and smashed the glass on a jewelry case. "They went for men`s rings, men`s bands, wedding rings, things like that. Very non-descript items that they could probably pawn or sell," said Wiggins.

She says they stole $19,000 worth of jewelry, plus the men's wedding band tool display kit that cost $2,300 to replace, not to mention the cost of fixing the glass that was shattered and spread all across the store.

"It really puts you on edge. Everybody who comes through the door, now you’re hyper-sensitive, so it was extremely alarming," said Wiggins.

Seattle Police say King avoided touching the glass with his fingers. "It's obvious that he's aware of latent prints, or DNA will link him to the case and he does everything possible at that point to avoid leaving prints. He's clearly thinking ahead of how do I prevent from being caught in this case," said Ret. Det. Myrle Carner with Crime Stoppers of Puget Sound.

That smash-and-grab happened just a little over a week after police say King used a pair of pliers to break the glass on a display case at Bellevue Rare Coins in West Seattle and then stole two trays of rings worth more than $36,000. Detectives identified him from surveillance images taken earlier in the day when he entered the store twice with his mask down. He's 6’5" tall, so it's hard to miss him, plus surveillance images showed him wearing the exact same jeans and tennis shoes as the robbery suspect.

King County prosecutors have charged King with 1st Degree Theft, the same charge he already had a pending case for from March 2nd  when Tukwila Police say he grabbed a $7,000 gold necklace out of the hands of an employee at the Ben Bridge Jeweler store in Westfield Southcenter mall and took off running.

And now, detectives in Tacoma say they believe he's also the suspect who used a handgun in an armed robbery on August 11th at the Bellevue Rare Coins store .

"It's unsettling to all of us, including the community," said Wiggins.

According to court documents, King was in prison until January 9th of this year.

He has prior convictions for:

Prosecutors have requested a $25,000 bail once he is caught, because he has had 15 warrants issued since 2016 for failing to appear in court.

He was last known to live in Kent, but has lived in Renton, as well.

If you can tell Seattle Police where to find him, Crime Stoppers of Puget Sound will pay you a cash reward of up to $1,000 and you will remain anonymous. Send the information through the P3 Tips app on your cell phone, or call the hot line at 1-800-222-TIPS(8477).