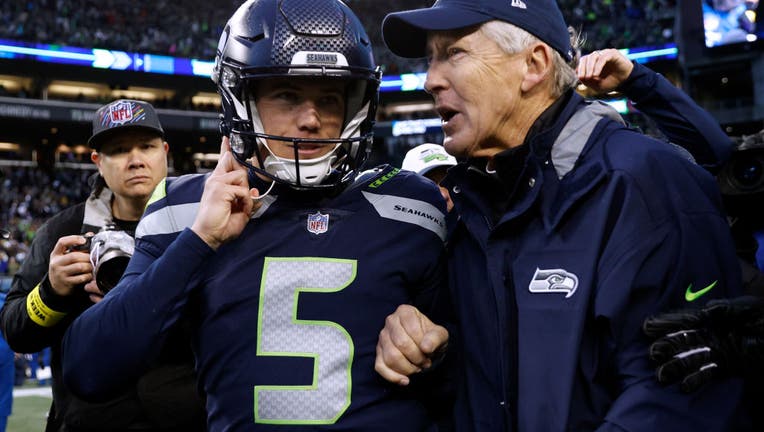 SEATTLE, WASHINGTON - JANUARY 08: Jason Myers #5 of the Seattle Seahawks celebrates with head coach Pete Carroll after kicking the game winning field goal in overtime to win the game at Lumen Field on January 08, 2023 in Seattle, Washington. (Photo b

According to ESPN's Adam Schefter, the deal is worth up to $22.6 million with incentives.

The contract makes Myers the second-highest paid kicker in the NFL behind Baltimore’s Justin Tucker.

"It’s just the first step in our offseason. We identified Jason, especially having the year he had, as somebody we wanted to get done as quickly as we possibly could. He’s a huge piece of our championship culture, and he was eager, as were we, to consummate a deal… It’s a first step for us for 2023," Seattle general manager John Schneider told the team’s website.

Myers was selected to his second Pro Bowl after he led the league in scoring in 2022 with 143 points.

Myers tied Stephen Hauschka's record for the most 50-plus yard field goals in one season in Seahawks franchise history.

Seahawks head coach Pete Carroll said Myers had a "terrify year" and wants to b here.

"We wanted to stay here the whole time," Myers told Seahawks.com. "We had no plans of leaving and we love this organization, the coaching staff, players, everything. I'm so excited to be able to stay for four more years at least, hopefully more.

Myers would have been a free agent at the start of the new league year in March.