Meet the 17-year-old Washington kid, attending his first ever MLB game, who caught the home run ball that sent the Mariners to the playoffs for the first time in more than 20 years: "I wanted to give Cal the ball."

SEATTLE - For the first time in club history, the Seattle Mariners are hosting postSEAson watch parties at T-Mobile Park!

Fans can watch the M's on MarinersVision, the biggest screen in the Pacific Northwest! Plus, enjoy music and other surprises at the Wild Card Watch Party. 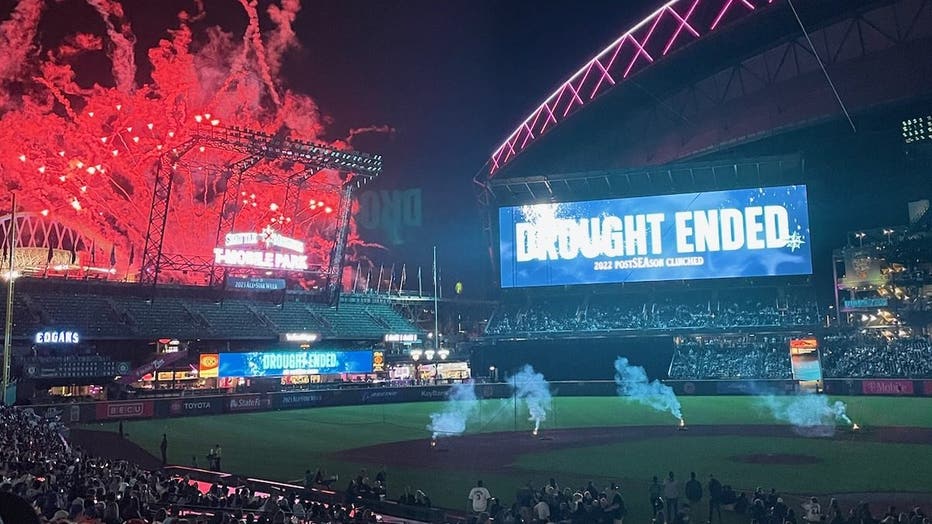 "We couldn’t be more excited for our fans to come together at T-Mobile Park to watch our push for a World Series title. We want the team to be able to feel our fans’ support and electric energy all the way from Seattle," said Catie Griggs, President of Business Operations.

Tickets are available now for $5 for season ticket holders and $10 for the general public. A portion of the proceeds will benefit Mariners Care Foundation.

There will be open seating in the Main Level from foul pole to foul pole. Fans will also have access to The 'Pen, select concession stands and the Mariners Team Store.

Parking in the Mariners Garage is also available for $10.

SEATTLE, WASHINGTON - SEPTEMBER 30: Tony Kemp #5 of the Oakland Athletics turns a double play over Ty France #23 of the Seattle Mariners during the eighth inning at T-Mobile Park on September 30, 2022 in Seattle, Washington. (Photo by Steph Chambers/Getty Images)

Cal Raleigh delivered a pinch-hit, walk-off home run off Oakland Athletics reliever Domingo Acevedo on a full count with two outs in the bottom of the ninth inning to lift the Mariners to a 2-1 victory on Friday night.

The win clinches the first playoff berth for the franchise in 21 years, snapping the longest playoff drought of any team in the "Big Four" North American sports.