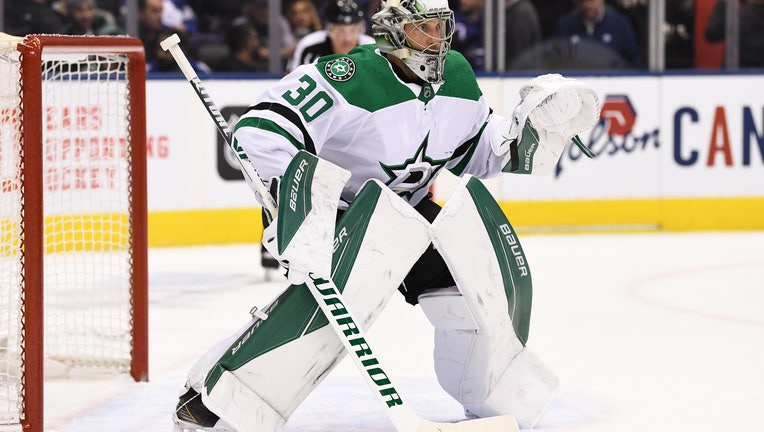 Dallas Stars Goalie Ben Bishop (30) in action during the regular season NHL game between the Dallas Stars and Toronto Maple Leafs on February 13, 2020 at Scotiabank Arena in Toronto, ON. (Photo by Gerry Angus/Icon Sportswire via Getty Images)

Dallas Stars goaltender Ben Bishop has waived his no-movement clause to be exposed in the Seattle expansion draft next week after approaching his team with the idea.

The move, which the team confirmed Thurdsay, allows Dallas to protect veteran goalie Anton Khudobin from the Kraken. Jake Oettinger, the 22-year old who is considered the Stars’ goalie of the future, is exempt from the expansion draft because he is still on his entry-level contract.

Any player with a no-movement clause must be protected from the expansion draft unless he waives it. Buffalo’s Jeff Skinner is among the players who have agreed to waive that clause and be exposed to Seattle, while Minnesota bought out Ryan Suter and Zach Parise and Florida bought out Keith Yandle — all players with no-movement protection in their contracts.

Each team’s protected list — seven skaters, three defensemen and a goalie or eight skaters at any position plus a goalie — is due Saturday. The NHL is expected to release them to the Kraken, other teams and the public sometime this weekend.

Bishop, 34, will not be on Dallas’ list and gives Seattle general manager Ron Francis something to think about when considering his options in net. Vancouver’s Braden Holtby, who won the Vezina Trophy as the league’s best goalie in 2016 and backstopped Washington to the Stanley Cup in 2018, is also expected to be among those available.

Taking Holtby from the soon-to-be-rival Canucks could give the Kraken a recognizable face of the franchise like Vegas had with three-time Cup-winning goalie Marc-Andre Fleury. Bishop, an American from Denver with a impressive resume, also fits that bill.

For the previous three seasons, Bishop was Dallas’ No. 1 goaltender and one of the best in hockey. His 2.33 goals-against average ranks second and his .923 save percentage third among NHL goaltenders during that stretch.

Bishop helped Tampa Bay reach the 2015 Cup Final before going down with an injury, and his health could scare off Francis. But he has also only played three games since March 2020 and could be fresh in the fall after another brief NHL offseason.

The first head coach of the Seattle Kraken franchise, Dave Hakstol joined Q13 sports reporter Alyssa Charlston to detail how they're preparing for the expansion draft and his player development process. He also breaks down the Kraken mascot.