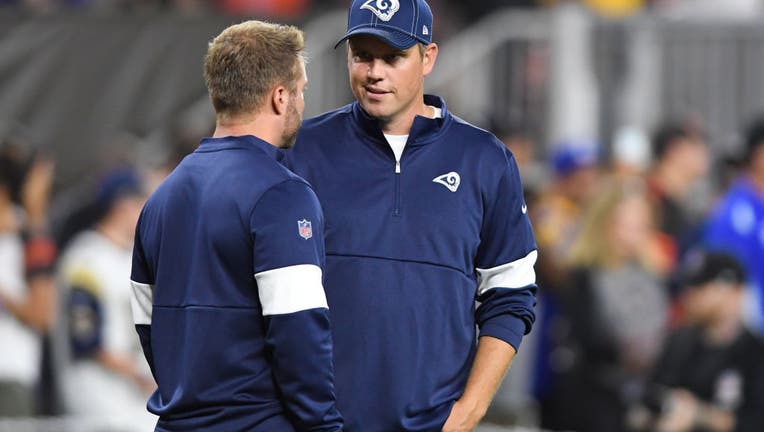 RENTON, Wash. - The Seattle Seahawks hired Shane Waldron as their new offensive coordinator, the first time in his career he’ll be responsible for running an offense and calling plays.

Waldron’s hiring was announced Friday, more than two weeks after the Seahawks parted ways with Brian Schottenheimer. Seattle set a franchise record for points scored last season but there were clear philosophical differences between Schottenheimer and coach Pete Carroll.

Waldron, 41, spent the past four seasons as the passing game coordinator for the Los Angeles Rams. Now he gets to run an offense for the first time with one of the top quarterbacks in the league in Russell Wilson at the controls.

"We are really excited to bring Shane Waldron to the Seahawks," Carroll said in a statement. "His creative and competitive approach to the game will bring out the best in our players and coaches. Shane also brings great knowledge and insight about our division. His vision for the future, along with the caliber of players on our offense, made him a must get for us."

The Seahawks also added Andy Dickerson as their run game coordinator. Dickerson spent the past nine seasons with the Rams as well. He replaces Brennan Carroll, who left to become a college offensive coordinator at Arizona.

"We are fortunate to be able to add Andy Dickerson as our run game coordinator," Carroll said. "He has worked with Shane for many years and that continuity will be an integral factor in the transition process. They, together with our staff, will work to capture the many strengths we have developed over the years and expand the explosive ability that Russell and crew have afforded us."

Waldron becomes the fourth offensive coordinator to serve under Carroll during his tenure with the Seahawks, and the third for Wilson. Jeremy Bates lasted one season. Darrell Bevell held the job for seven seasons before he was let go following the 2017 season and Schottenheimer was brought in.

Waldron previously also worked with Washington and New England. He has experience at the college level with Notre Dame and UMass.

While he was the passing game coordinator with the Rams, he’ll be asked to operate the Seahawks offense the way Carroll wants. That means an effective run game and passing concepts that play to the strengths of Wilson and his receivers, including DK Metcalf and Tyler Lockett.

Last season, Seattle’s offense was humming at a record pace through the first half of the year, but problems emerged starting with the Seahawks’ Week 10 loss to the Rams.

Over the final eight games, Seattle averaged 23.1 points per game after averaging 34.3 through the first eight. Wilson averaged under 200 yards passing and defenses figured out schemes to take away the Seahawks’ downfield passing game.

Carroll and Wilson expressed a concern after the season with the lack of adjustments to the way defenses were playing the Seahawks.

Wilson spoke about what he wanted in an offensive coordinator following Schottenheimer’s departure, saying it was important to have someone who could teach the game. "Somebody who is a tremendous leader of men, somebody who also is extremely passionate about the game and creative. And as well, knows how to find every single guy’s strength," Wilson said.