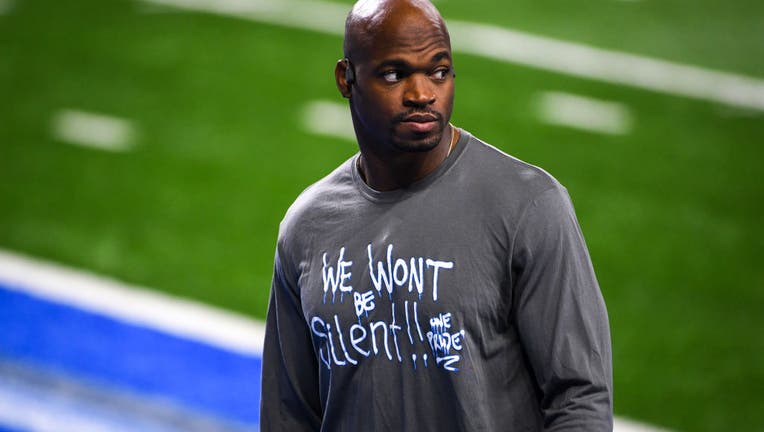 DETROIT, MI - NOVEMBER 15: Adrian Peterson #28 of the Detroit Lions looks on before the game against the Washington Football Team at Ford Field on November 15, 2020 in Detroit, Michigan. (Photo by Nic Antaya/Getty Images)

SEATTLE - The Seattle Seahawks elevated veteran running back Adrian Peterson from the practice squad to the active roster for Sunday’s game against the San Francisco 49ers.

Seattle made the roster move on Saturday due to questions about its running back depth. The Seahawks listed starter Alex Collins, and backups Rashaad Penny and Travis Homer as questionable on Friday due to injuries. Collins has been slowed by an abdominal injury but hasn’t missed any games. Penny (hamstring) and Homer (calf) both missed last week’s loss at Washington.

Peterson was signed to the practice squad on Wednesday. The 36-year-old played three games earlier this season for Tennessee after Derrick Henry went down with injury. Peterson started two games and had 27 carries for 82 yards and a 3.0-yard average per rushing attempt and one touchdown run.

His longest run, 16 yards, came against Houston. Peterson was released by the Titans on Nov. 23.

Now in his 15th season, Peterson is a four-time All-Pro, seven-time Pro Bowl selection, was the 2012 league MVP and is likely bound for the Hall of Fame.