RENTON, Wash. - The National Football League on Wednesday announced the full 2021 schedule for the Seattle Seahawks which includes five prime-time games. Seattle is looking to return to the postseason for the 10th time in 12 seasons.

The Seahawks will play all three preseason games, plus ten regular-season games on Q13 FOX, the official TV partner of the Seahawks.

Q13 News This Morning was first to tell you about the NFL's Week 1 Schedule, including a doubleheader on FOX, starting with Seahawks at Colts at 10:00 a.m. PT on Sunday, Sept. 12.

Seattle is playing at Indianapolis for the first time since October of 2013. They lost that game but went on to win the Super Bowl.

This will be the second straight season the Seahawks have opened on the road. Seattle won its 2020 season opener in Atlanta.

Scroll down for full schedule

Seattle will start the season with three of its first four games on the road, taking on its first NFC West opponent, San Francisco, in Week 4.

The Seahawks then have their first prime-time game on Oct. 7 when they face the LA Rams on Thursday Night Football on FOX.

Seattle has its Bye in Week 9.

The Seahawks then face Green Bay and Arizona before heading to the other Washington for a Monday Night Football game. Then a couple of road games to take on Houston and the LA Rams.

The final three games of the season include two home games against Chicago and Detroit. Seattle wraps up the season on the road at Arizona on Jan. 9 on FOX. 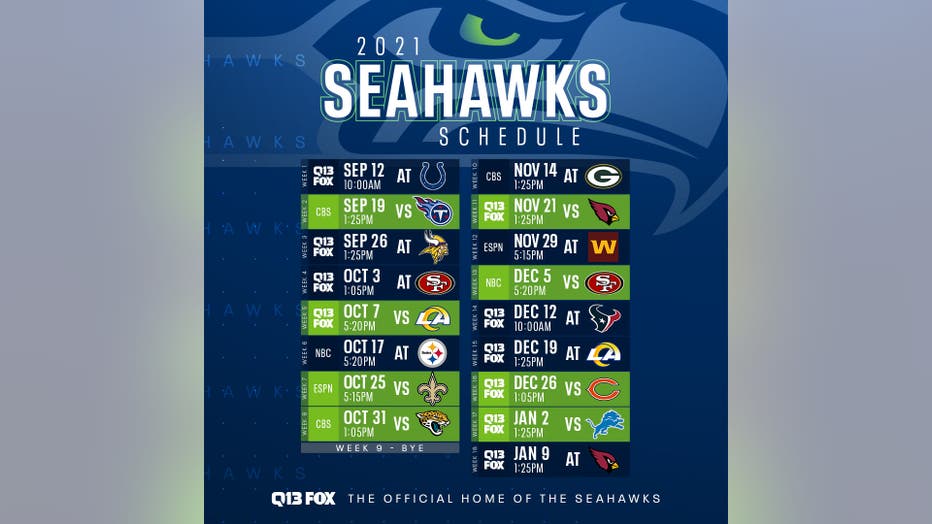 Fans to return to Lumen Field

Fans were not able to attend Seahawks home games last season at Lumen Field due to the COVID-19 pandemic.

According to the team, single-game tickets go on sale Wednesday evening with a maximum of eight tickets per person. All tickets will be digital for mobile entry and prices will vary based on demand.

RELATED: Seahawks make most of 3 picks and hit needs in draft

The NFL is expanding the 16-game regular season to 17 games starting next season. The extra games will be made up of additional AFC vs NFC match-ups.

At the same time, the preseason will be reduced to three games starting this year. All three preseason games can be seen on Q13 FOX, the official TV partner of the Seattle Seahawks.

Stay connected with Q13 FOX on all platforms for the latest Seahawks news, scores and alerts: