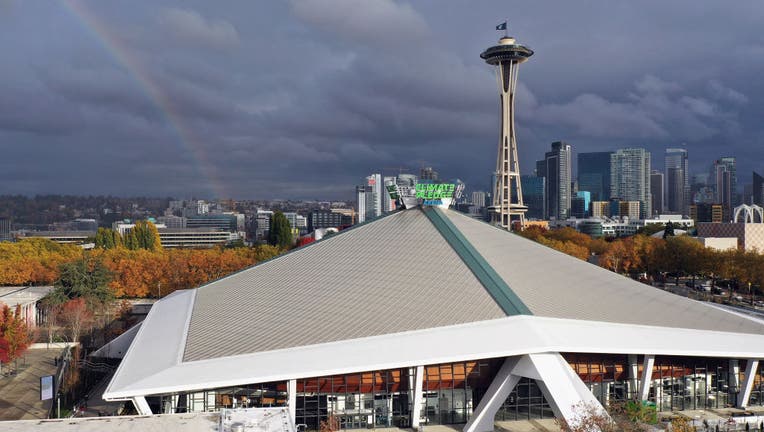 SEATTLE, WASHINGTON - OCTOBER 23: A rainbow forms behind the arena prior to the inaugural home game for the Seattle Kraken as they face the Vancouver Canucks at the Climate Pledge Arena on October 23, 2021 in Seattle, Washington. (Photo by Bruce Benn

SEATTLE - The NCAA Tournament for women’s basketball is going to a two-host format for its regional rounds next year with eight teams apiece playing in Seattle and Greenville, South Carolina.

Each of those sites will host two regional semifinal games March 24 and two more on March 25. Each site will host one regional championship on March 26 and another on March 27.

Eight teams will play at Climate Pledge Arena and eight will be at Bon Secours Wellness Arena in Greenville, the committee said.

"The committee spent a significant amount of time in determining the regional playing format and preferred playing location for the First Four games," said Nina King, chair of the committee and vice president/director of athletics at Duke. "The decision to continue with top 16 sites hosting First Four games was backed by the positive feedback from the schools that participated in those games during the 2022 championship. We feel both decisions provide for the best student-athlete experience."

In the past, the NCAA Tournament had four regional sites.

Rick Nixon, the NCAA associate director for media, said the committee announced the eventual switch to two regional sites in 2019 and named the host cities in 2020 in an attempt to maintain neutral sites for the regional rounds. The NCAA men’s regionals remain at four sites.

The NCAA Tournament bracket will be revealed on March 12, the same day that the men’s tournament announces its teams.

The First Four opening-round women’s games will take place March 15-16 and will be conducted on campuses of teams seeded among the top 16. All sites bidding for round-of-64 and round-of-32 games must agree to the possibility of hosting a First Four game as well.

Ball State athletic director Beth Goetz will serve as the NCAA Division I Women’s Basketball chair for the 2022-23 school year. Oregon deputy athletics director Lisa Peterson is vice chair and will take over as chair in 2023-24.