SEATTLE - The Seattle Mariners have promoted general manager Jerry Dipoto to president of baseball operations and signed manager Scott Servais to a multiyear contract extension, keeping the pair locked in to see oversee the completion of the franchise rebuild started three years ago.

Both deals, announced Wednesday, had been expected and come with the Mariners trying to chase a playoff spot in the American League. Seattle has the longest postseason drought of any team in North American sports in the four major leagues, last reaching the postseason in 2001.

Dipoto, who also received a multiyear extension as part of his promotion, has rebuilt the Mariners farm system with a bevy of top prospects, some of which have become contributors this season. He’s also made some deft moves in free agency and trades to build one of the most reliable pitching staffs in the AL.

"Jerry is a creative, passionate leader with a clear vision for our franchise," Mariners Chairman John Stanton said. "Following the 2018 season, Jerry came to us with a plan for how to compete for and win championships. He was transparent on the difficulty, but also clear on the goals and milestones. In the two-and-a-half years since, he has led the baseball operations group through challenges on and off the field, while executing on the timeline he laid out." 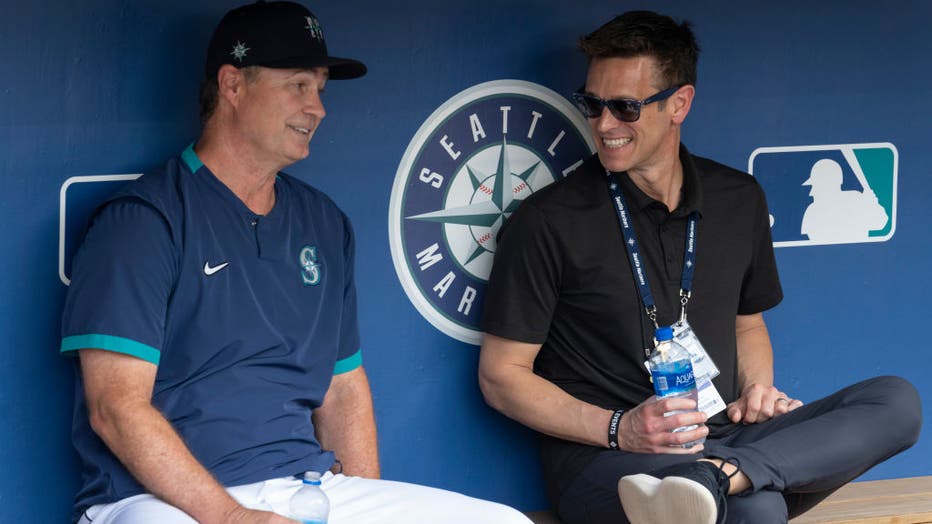 SEATTLE, WA - AUGUST 14: Seattle Mariners manager Scott Servais and general maanger Jerry Dipoto talk in the dugout before a game between the Toronto Blue Jays and the Seattle Mariners at T-Mobile Park on August 14, 2021 in Seattle, Washington. The M

Servais has helped make the mixture of prospects and some established veterans work on the field. Seattle entered play on Wednesday 7 ½ games behind Houston in the AL West, but only 3 ½ behind Boston in the wild-card race.

Dipoto and Servais have worked in tandem since both were hired by the Mariners after the 2015 season. They have worked together since 2011 when Dipoto, then the GM of the Los Angeles Angels, hired Servais as his assistant.

NEXT: Commentary: Production, loyalty, price all reasons to pick up Kyle Seager’s option for one more year

The Mariners have gone 419-422 under their leadership. This season, Seattle is on pace for its third winning season with the pair in charge.