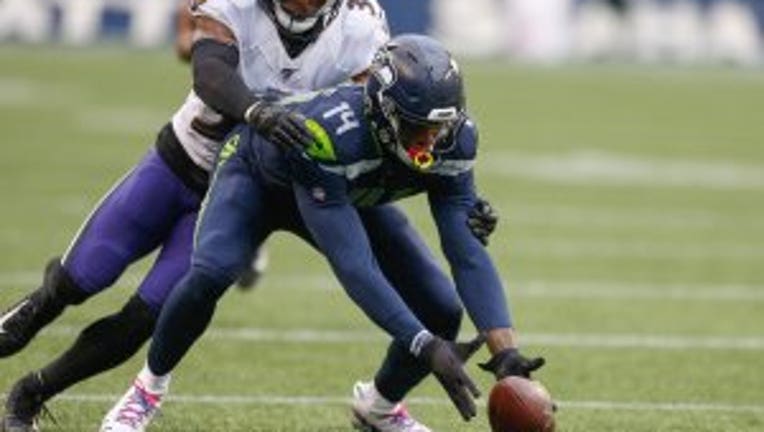 SEATTLE, WA - OCTOBER 20: Wide receiver DK Metcalf #14 of the Seattle Seahawks fumbles in the fourth quarter against cornerback Brandon Carr #39 of the Baltimore Ravens at CenturyLink Field on October 20, 2019 in Seattle, Washington. (Photo by Otto G

SEATTLE – Not long after so many sang Seattle’s praises for an impressive season start under an MVP-caliber quarterback did the Seahawks embarrass itself at home with a 30-16 loss to Baltimore.

There’s poetry in the Seahawks secondary proving itself helpless in front of a mainstay of the ‘Legion of Boom’ era, Earl Thomas. QB Lamar Jackson tore up CenturyLink Field under his cleats, and there wasn’t much Seattle could do to stop him.

Jackson also picked Seattle apart with his throwing arm. A 50-yard pass to Miles Boykin immediately after kickoff set up an easy Baltimore touchdown; it was foreshadowing for what was to come.

“We made a big mistake early. Gave them a freebie down the field,” coach Pete Carroll said of the play. “Just distasteful. I hate it, that we gave them that. There’s no way that should ever happen.”

It’s telling that within 48 hours of the drubbing, Seattle traded a fifth-round pick to the Lions for veteran safety Quandre Diggs. Diggs was a reliable and well-liked presence in Detroit’s locker room. Carroll hopes he’ll bring that and more to Seattle's leaking backfield.

But the Seahawks secondary has been shaky since the season opener. Russell Wilson and a few miracle plays always proved to be the difference, but neither Russ nor the miracles came Sunday. Wilson finished on 20 of 41 passing for 241 yards and his first interception of the year – a pick-six.

If anything, the loss cements Wilson’s MVP status within the club. If Russ doesn’t perform, Seattle doesn’t have a chance.

So, what now? The Hawks face a (1-6) Falcons team that will likely be without Matt Ryan, but Seattle’s won most of its games by the narrowest of margins.

The Seahawks need to make a statement at Mercedes-Benz Stadium; Wilson and company must play angry and crush the Falcons to restore confidence in themselves and for Seattle.

QUANDRE DIGGS/ MARQUISE BLAIR: The trade for Diggs makes it obvious that the team is unhappy at safety. Tedric Thompson has had a few monster plays this season, but he’s had even more defensive lapses, and Carroll may have had enough. And the rookie Blair colored his coach impressed in his first pro start. All three players are vying for a position that’s very much up in the air, and Sunday’s game may decide which man comes out on top.

DK METCALF: If there was any hope in Seattle for a comeback against the Ravens, it ended when Metcalf fumbled the ball. Mistakes happen, and the team expected growing pains in Metcalf’s rookie year. What matters now is how he responds, and a pissed-off 6-foot-4, 230-pound receiver isn’t something many secondaries want to face.