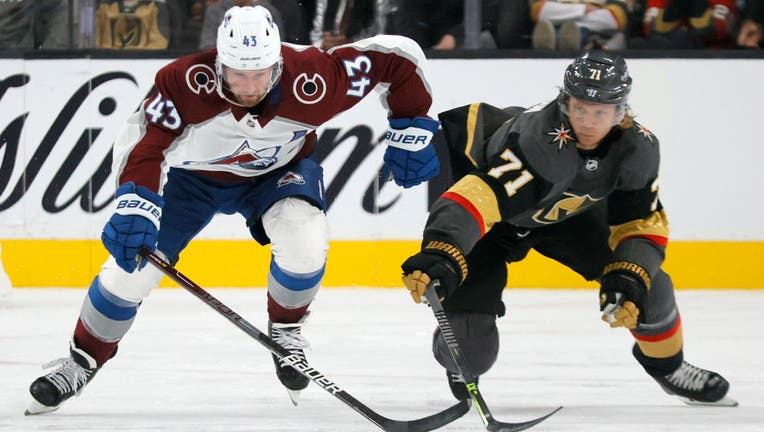 LAS VEGAS, NEVADA - SEPTEMBER 28: Darren Helm #43 of the Colorado Avalanche skates with the puck against William Karlsson #71 of the Vegas Golden Knights in the third period of their preseason game at T-Mobile Arena on September 28, 2021 in Las Vegas

The Vegas Golden Knights have made deep playoff runs in three of their four years and are used to being looked at as the team to beat in the Western Conference.

Advancing in the postseason, though, is not going to satisfy a young franchise that lost in the Stanley Cup Final in its inaugural season in 2018 and reached the conference finals in each of the last two years.

"We know what the expectations are and our goal is to win a Stanley Cup here, and that’s every year," said Vegas coach Peter DeBoer, who enters his second season behind the bench with the Golden Knights. "There’s obvious pressure that comes with that, but our group has shown that it doesn’t overwhelm us."

The Colorado Avalanche are actually favored to win the West. Minnesota, Dallas, Edmonton and St. Louis seem set up to earn playoff berths. Teams such as Winnipeg, Chicago and Calgary possibly will play for a spot in the playoffs.

The expansion Seattle Kraken, Nashville, Vancouver, Arizona and the trio of California teams will register as surprises if they finish in the top eight of the top-heavy, 16-team conference.

Vegas and Colorado both made significant changes between the pipes, trying to manage a flat salary cap.

The Golden Knights traded reigning Vezina Trophy winner Marc-Andre Fleury to Chicago in July for minor league forward Mikael Hakkarainen. It was clearly a salary dump, dealing a goaltender who is set to count $7 million against the cap this season in the final year of his contract.

Vegas is giving Robin Lehner a shot to be its No. 1 goalie, but a teammate pointed out this isn’t his first opportunity to be a team’s top netminder.

"He was a clear-cut No. 1 in Buffalo," forward Mark Stone said. "His numbers were good, the team wasn’t."

After Vezina finalist Philipp Grubauer didn’t get a deal done with the Avs, he signed a $35.4 million, six-year deal in Seattle. The 29-year-old Grubauer finished second in the NHL with 30 wins last season and will give the offensively challenged Kraken a chance to keep games close.

Colorado is turning to 6-foot-5 goalie Darcy Kuemper, acquired from Arizona after he had a 2.56 goals-against average last season. The Avs also have a healthy Pavel Francouz, who missed last season after undergoing hip surgery, and Jonas Johansson as options in net.

Oilers superstar Connor McDavid has established himself as the world’s best hockey player, winning the Hart Trophy as NHL MVP last year for the second time in five years.

That hasn’t helped Edmonton when it matters most, failing to advance in the playoffs since McDavid was a rookie in 2017. He has put in work this offseason on his defensive game.

Blues general manager Doug Armstrong has seen a lot in his three decades as an NHL executive, watching the game evolve, and he has noticed a slight shift in favoring fast over big players.

"The game is a little bit quicker right now," Armstrong said. "There seems to be less whistles than there used to be."

The Central Division appears to be better than the Pacific, and Avs defenseman Cale Makar said he can make a case it is also stronger than the Atlantic and Metropolitan Divisions.

"I think it’s the toughest division in the NHL," Makar said. "Every team is strong in it, and every team can beat each other night in, night out."

Minnesota star winger Kirill Kaprizov seems set for an impressive follow up to his rookie season, when he had 27 goals and 24 assists in 55 games to easily win the Calder Memorial Trophy. He figures to draw much more attention this season from opposing defenses.

The three teams with the fewest points in the Western Conference in each of the last two years call California home, and it would not be surprising to see the trend continue this season.

The Los Angeles Kings are in a three-year playoff drought and so are the Anaheim Ducks. The San Jose Sharks were a regular in the postseason for two decades before missing out the last two years.