It appears the City of Everett and the Washington State Department of Transportation (WSDOT) are at odds, after the state’s "Right of Way Safety Initiative" began work in Everett.

EVERETT, Wash. - It appears the City of Everett and the Washington State Department of Transportation (WSDOT) are at odds, after the state’s "Right of Way Safety Initiative" began work in Everett.

The program clears out homeless encampments on WSDOT property while ensuring the people living in those camps are provided housing.

Mayor Cassie Franklin got word of people being housed in Everett, and took to Twitter blasting the work. In a release sent out Friday, the Everett mayor called it an "unacceptable burden for our city to bear."

Franklin wrote that she was informed that a large number of unsheltered individuals were being brought from outside of Everett and placed in motels throughout the city.

She urged WSDOT to discontinue the practice.

WSDOT, however, had a very different take – noting that only three people had received services to date. It’s unclear if they were sent to motels or more permanent housing.

According to WSDOT, Everett Police and the city’s homeless coordinator were involved with the work that’s taken place, too.

The secretary of WSDOT, along with the Washington State Department of Commerce and Washington State Patrol – the other entities working on the initiative– took the rare step of publicizing its direct response to the mayor due to "mischaracterizations" per an e-mail shared with FOX 13.

"You attempted to shame our agencies and accused us of transporting people experiencing homelessness across county lines, an accusation that is patently false and offensive," the letter read – going on to demand a retraction.

The blowback comes less than a week after Gov. Jay Inslee celebrated the early successes of the program. The legislature earmarked $300 million for this work earlier this year.

Inslee said it’s proof that we can simultaneously clean up highways while saving lives. He even celebrated the collaboration they’ve seen.

"The state is not the only player in this game," he said during a media event last week. "To be successful, we have to work with all levels of government and nonprofits – fortunately, I’m seeing that good cooperation to see this team run."

It’s unclear where the disconnect grew between Everett’s leadership and the "Right of Way Safety Initiative."

The Mayor’s Office has not made Mayor Franklin available to answer direct questions.

Her communications manager said they had heard that 50 people were being housed in area motels, but admitted they didn’t know where the people were coming from – or going to.

According to the Mayor’s Office, they’re requesting a seat at the table to address the homelessness crisis – noting they want to ensure safeguards are in place to support individuals while ensuring neighborhoods and businesses aren’t impacted either.

WSDOT appears to have taken issue with the claim that they were never in the loop, stating that in addition to the city’s homeless coordinator being involved with the recent work – the letter indicates that Everett’s deputy mayor was urged to apply for funding so they could directly be involved with the work. They declined.

Details of where the current work is unfolding hasn’t been publicized, though it appears more work will be on the horizon.

In 2021, the state released a map detailing homeless encampments along WSDOT property throughout the state. The map, now dated, listed 251 encampments in Snohomish County alone. 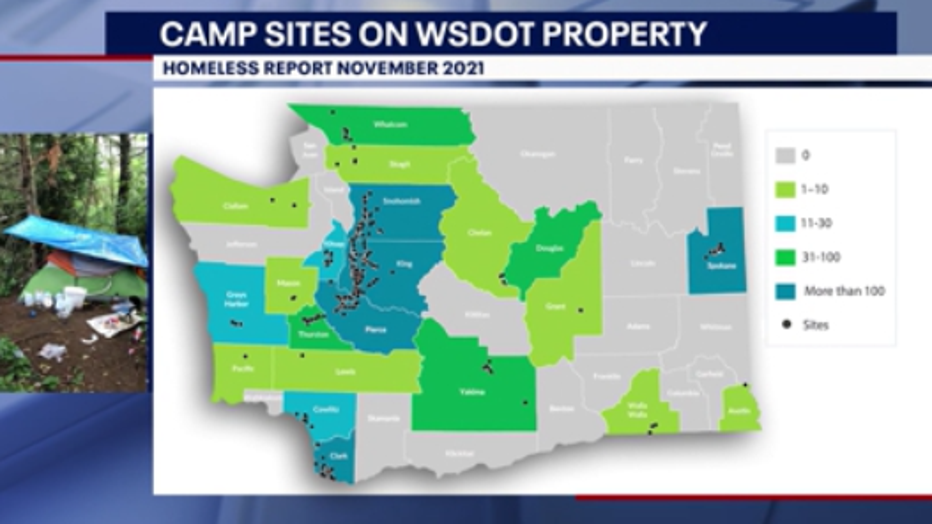 A map released by the state depicting how many homeless encampments have been found on WSDOT property in various counties.

It’s unclear how many camps exist at this point in time, though those living on the street tell FOX 13: they hope the work continues.

"If you could provide aid and shelter, you know, with buildings that aren’t being used it seems like a win-win situation," said Joey Nygaard – a homeless man living near I-5.

Nygaard said it feels as if being homeless has been criminalized in Snohomish County – noting while he’s committed crimes and landed in prison before, he’s found himself in-and-out of jail for things like trespassing and loitering.

"I feel like I’m a late bloomer, but I’m maturing a little bit," he said. "I want to be a productive  member of society, but it’s kind of hard to do down here in the sticker bushes."