Garbage man pulls flag out of trash can, folds it properly

Marine Corps veteran Don Gardner has pulled at least 11 American flags from landfills in his 11 years in the garbage business.

HUNTINGTON, Utah - Don Gardner is the kind of garbage collector who will get out of his truck to bring elderly residents’ cans to the street when they forget.

And when the Marine Corps veteran was caught on camera last week taking an American flag out of the trash to fold and dispose of it properly, it came as a surprise to no one who knows him.

"That is Don. That is who Don is," friend Whitney Phelps told KSTU.

Gardner has been collecting garbage in Emery County, Utah, for 11 years. In that time, he’s pulled at least a dozen flags from trashcans and landfills.

"I took an oath once to defend this country and our flag, and I still do," he said.

Brooke Cowley caught the latest act on video, then shared it to social media so the community could "see the care and love that he gave our flag." Cowley told KSTU that she’s the one who accidentally threw the flag away.

"Immediately I was so embarrassed," Cowley said. "I was petrified, because I’m married to a veteran. What am I doing?"

Gardner, meanwhile, had no idea he was being filmed.

"It’s just something I do," he said. "I get angry sometimes. Sometimes it’s a mistake; most of the time it’s on purpose. I have a problem with that, so I just take it out and take care of it."

The veteran wants his neighbors to know there’s a right way to dispose of an American flag, and he’s happy to educate anyone who will listen.

How to dispose of an American flag

When an American flag "is in such condition that it is no longer a fitting emblem for display," it should "be destroyed in a dignified way, preferably by burning," according to the U.S. Flag Code. 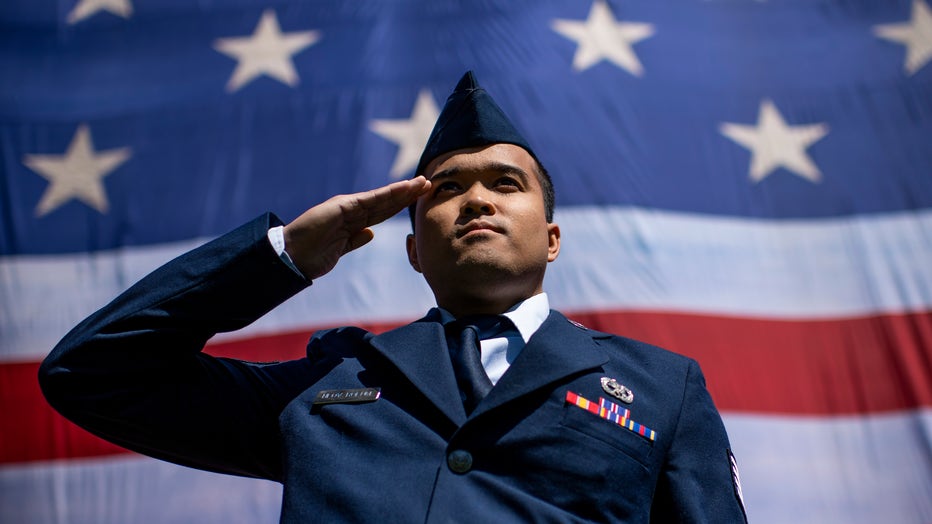 BOSTON, MA - APRIL 18: A member of the Hanscom Air Force Base looks on as the American Flag is displayed over the Green Monster before a game between the Boston Red Sox and the Minnesota Twins on April 18, 2022 at Fenway Park in Boston, Massachusetts

One way to ensure it’s given a dignified sendoff is to bring the flag to a local flag collection box. They can be found at local VFW and American Legion chapters, Boy Scout and Girl Scout offices, and sometimes at government buildings like police stations. Once the flag boxes are full, the respective organizations will hold flag-retirement ceremonies.

If you can’t drop off the flag, you can have your own private retirement ceremony, but make sure the flag is folded properly. Then, say the Pledge of Allegiance or have a moment of silence as the flag burns. Be sure to follow local and state fire laws.

When burning isn’t an option, you can fold the flag and place it in a ceremonious box, then bury the box. In some cases, American flags can be recycled.