Calmer weather ahead for Western Washington

SEATTLE - A powerful windstorm knocked out electricity to hundreds of thousands of people early Wednesday morning in Western Washington.

As a result, several schools have announced that they will be closed on Wednesday. You can see the full list here.

The windstorm also caused damage in Oregon and Eastern Washington, where one woman was killed in Spokane after a tree fell on her car.

Orcas Power & Light reported at least 14,419 without power, including San Juan Island and Lopez. Nearly 100% of customers are experiencing an outage.

Crews were working as quickly and safely as possible to restore electricity. Around 4:45 p.m. in Lacey, College St. SE between 31st Avenue SE and 37th Ave. SE remains closed due to a fallen tree and power lines, according to spokesperson for City of Lacey. PSE is aware and due to higher priority places, services are fully engaged. There is no estimated response time.

Q13 Chief Meteorologist Lisa Villegas was tracking gusts of 50 mph across much of the region, including areas of Snohomish and Skagit counties.

Wind gusts in some areas, like Whatcom County, exceeded 70 mph.

Q13 News crews were monitoring downed trees and power lines down across the region.

Firefighters in Tacoma said a tree fell on a home, trapping someone inside.

Crews were able to rescue the trapped resident who was taken to a nearby hospital for evaluation. The home suffered significant damage.

According to the Washington State Patrol, a semi-truck was stuck partially hanging over the edge of Deception Pass Bridge on State Route 20 around 4 a.m.

Troopers said the driver got out of the truck safely. The road would be blocked until a tow truck could remove the semi, but high winds were making it difficult. The bridge has since reopened. 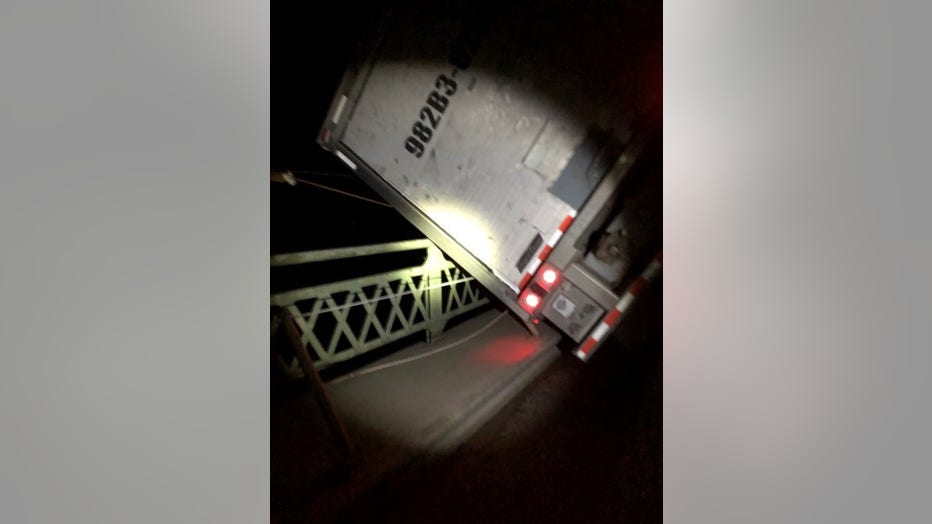 What to do during and after a power outage 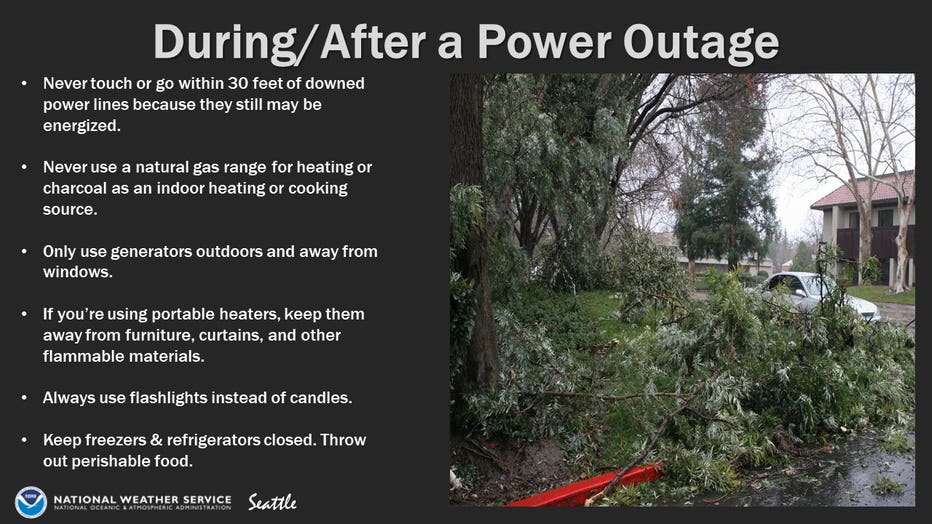 Both directions of I-5 were closed around 1:00 a.m. because of power lines down across the freeway, according to the Washington State Department of Transportation. Both directions had reopened by 2:00 a.m.

In Kirkland, both directions of Juanita Drive are closed in the 8900 block. Drivers can expect delays for a couple of hours.

Several roads are closed in Kitsap County due to downed trees or power lines. See the full list here.

The Washington Coast Guard is responding to multiple vessels impacted by high-winds event north of Anacortes. There have been reports of sunken peer, boats pulled loose from moorings and one floating adrift. No injuries or pollution have been reported. Find those updates here.

The storm also closed area ski resorts, including Crystal Mountain and Mt. Baker, and delayed opening for skiing at Snoqualmie.

Seattle reached the normal January total rainfall before 3 A.M. Tuesday, making it the wettest start to a year on record, according to the National Weather Service in Seattle. Sounder commuter trains connecting Snohomish County to Seattle were canceled all week because of the threat of landslides.

By 11 a.m. Tuesday, Seattle and Olympia had set new rainfall records for the day with 1.34 inches in Seattle and 1.70 inches in Olympia, according to the National Weather Service in Seattle.

The Snoqualmie River near Carnation, Washington, is expected to produce minor to moderate flooding by Wednesday.

The Washington state Department of Transportation reported a landslide Tuesday blocking the northbound lane of US 101 west of Olympia near Artic. Crews were working to clear it by the end of the day, officials said.

Excessive rain is also leading to landslide threats into Wednesday.

Snow also fell over the Northern Cascades overnight and into Tuesday before turning to rain as temperatures increased.