The explosions were seen near Kharkiv, Ukraine, a city with a population of roughly 1.4 million nested near the eastern border and approximately 300 miles from the capital city of Kyiv, Ukraine.

The disturbing images come as Russian President Vladimir Putin announced a "special military operation" in the country while warning those who attempt to intervene would lead to "consequences they have never seen."

"I have a few words for those who could feel tempted to interfere with ongoing developments: whoever tries to impede us, let alone create threats for our country and its people must know that the Russian response will be immediate and lead to the consequences you have never seen in history," Putin said.

Images from journalists on the ground captured Russian troops and military vehicles advancing through Ukraine. Explosions were reported in several cities in addition to Kharkiv, including Kyiv and Odessa. 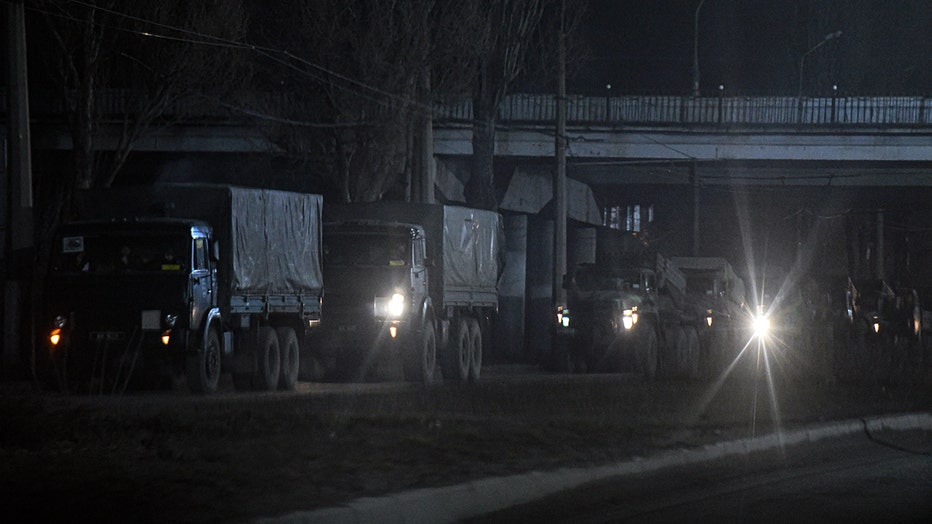 U.S. President Joe Biden denounced the "unprovoked and unjustified" attack on Ukraine and said the world will "hold Russia accountable."

The attacks have been condemned by leaders and organizations throughout the world.

"I strongly condemn Russia’s reckless and unprovoked attack on Ukraine, which puts at risk countless civilian lives," NATO Secretary General Jens Stoltenberg said. "Once again, despite our repeated warnings and tireless efforts to engage in diplomacy, Russia has chosen the path of aggression against a sovereign and independent country."

"I am appalled by the horrific events in Ukraine and I have spoken to President Zelenskyy to discuss next steps. President Putin has chosen a path of bloodshed and destruction by launching this unprovoked attack on Ukraine. The UK and our allies will respond decisively," UK Prime Minister Boris Johnson said.

Biden is scheduled to meet with leaders of the G7 and is expected to deliver remarks Thursday announcing further sanctions on Russia.

This article was reported from Los Angeles. The Associated Press and FOX News contributed to this report.