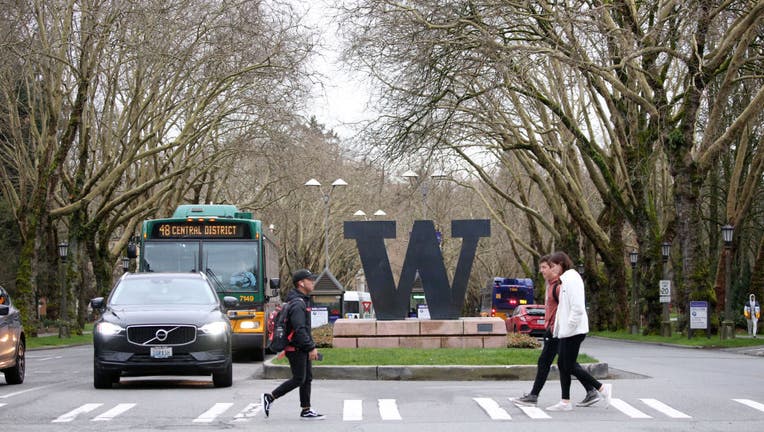 FILE - Students at the University of Washington are on campus for the last day of in-person classes.

SEATTLE - The University of Washington has agreed to pay more than $800,000 to settle Justice Department allegations that a professor submitted false documentation relating to a highly competitive grant.

The grant documents were submitted to the National Science Foundation by Mehmet Sarikaya, a professor in the university’s Materials Science and Engineering Department, according to NSF records and the settlement agreement, which was made public by the Seattle U.S. Attorney’s Office on Tuesday.

The documents misrepresented the involvement of two researchers who in reality were not involved in the work, the university said in an emailed statement.

That could have made the grant application more attractive. The university was awarded about $1.4 million for the work, which concerned how biology interacts with man-made solids at the molecular level, according to NSF records.

"The UW takes very seriously the responsibility of stewarding public funding of scientific research," university spokesman Victor Balta said in an email. "We are grateful this issue was brought to light and pleased to have it resolved."

Sarikaya did not immediately respond to an email sent after business hours Tuesday.

The university declined to say whether he had been disciplined in connection with the case. He remains a professor.

"Academic integrity demands accurate reports to grant funders," U.S. Attorney Nicholas Brown said in a news release. "This is an expensive, but critical, lesson that researchers must accurately report who worked on a project, as well as the results from their research."

The issue was first raised by a whistleblower who expressed concerns about the grant application and work performed under it.

The grant was issued under the NSF’s "Designing Materials to Revolutionize and Engineer our Future" program.

"The National Science Foundation Office of Inspector General is committed to ensuring the integrity of our grant recipients by holding accountable those who choose to engage in false claims and misrepresentation schemes. We appreciate the efforts of the Department of Justice in pursuing this matter and will continue to vigorously pursue oversight of taxpayer funds devoted to scientific research," said Inspector General Allison Lerner.