WASHINGTON (AP) —The White House says President Donald Trump believes Republican Senate candidate Roy Moore "will do the right thing and step aside" if sexual misconduct allegations against him are true.

Press secretary Sarah Huckabee Sanders told reporters traveling with Trump in Asia that the president believes a "mere allegation" — especially one from many years ago — shouldn't be allowed to destroy a person's life.

But Sanders says: "The president also believes that if these allegations are true, Judge Moore will do the right thing and step aside."

The Washington Post reported Thursday that an Alabama woman said Moore had sexual contact with her when she was 14 and he was a 32-year-old assistant district attorney.

The Moore campaign denied the report as "the very definition of fake news and intentional defamation."

In the Washington Post report, the woman, Leigh Corfman, says Moore met her several times when he was a local prosecutor in his 30s and at one point drove her to his home where he touched her over her underwear and guided her hand to touch him over his. They did not have sexual intercourse, the Post said.

Aside from Corfman, three other women interviewed by the Post in recent weeks said Moore pursued them when they were between the ages of 16 and 18 and he was in his early 30s. None of the other women said that Moore forced them into any sort of relationship or sexual contact. 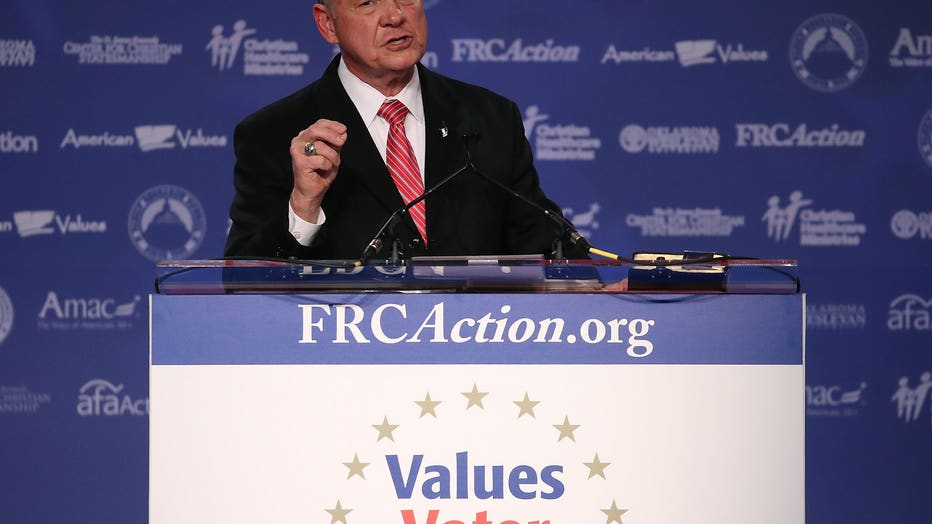 In his fundraising plea Thursday, Moore said "the Obama-Clinton Machine's liberal media lapdogs just launched the most vicious and nasty round of attacks against me I've EVER faced."

Moore says he refuses to repeat their lies, and he's counting on the help of "God-fearing conservatives like you to stand with me at this critical moment."

The Moore campaign says, "Judge Roy Moore has endured the most outlandish attacks on any candidate in the modern political arena, but this story in today's Washington Post alleging sexual impropriety takes the cake."

The statement also notes that Moore has been married to the same woman for 33 years and has four children and five grandchildren.

It continues: "After over 40 years of public service, if any of these allegations were true, they would have been made public long before now."

Several Republican senators, including GOP Leader Mitch McConnell, however, said if the report about Moore and sexual contact with a 14-year-old is true, he should drop out of the race.

In a one-sentence statement Thursday, Majority Leader Mitch McConnell says: "If these allegations are true, he must step aside."

The response was swift from Senate Republicans shortly after the Washington Post story.

Republican Sen. Cory Gardner of Colorado says, "The allegations against Alabama Senate candidate Roy Moore are deeply troubling." Gardner chairs the Republican senatorial campaign committee. He adds, "If these allegations are found to be true, Roy Moore must drop out of the Alabama special Senate election."

Sens. Pat Toomey of Pennsylvania and Jeff Flake of Arizona echoed those comments, and No. 2 Senate Republican John Cornyn of Texas calls the report "deeply troubling."