The woman said she could have been killed by two runaway truck tires had she not decided to delay her daily nap.

LAGRANGE, Ga. - A LaGrange woman is extremely lucky she was not hurt after a pair of tires crashed into her home Tuesday.

"Those tires are almost as tall as I am," said Della Ogletree.

"It sounded like a bomb had went off and I said what in the world is that," she said.

The truck tires crashed into her life around 4 p.m. Tuesday. They came in through an outside wall and went through one bedroom and into another.

"It appears that an 18 wheeler was traveling on the roadway when a set of tires with wheels (tandems) broke off the trailer and rolled, striking the home," LaGrange police said in a statement to FOX 5. "The tires and wheels were heavy enough and were moving fast enough to break through the exterior of the home."

Ogletree says by the grace of God she was not hurt because she decided to delay her nap. 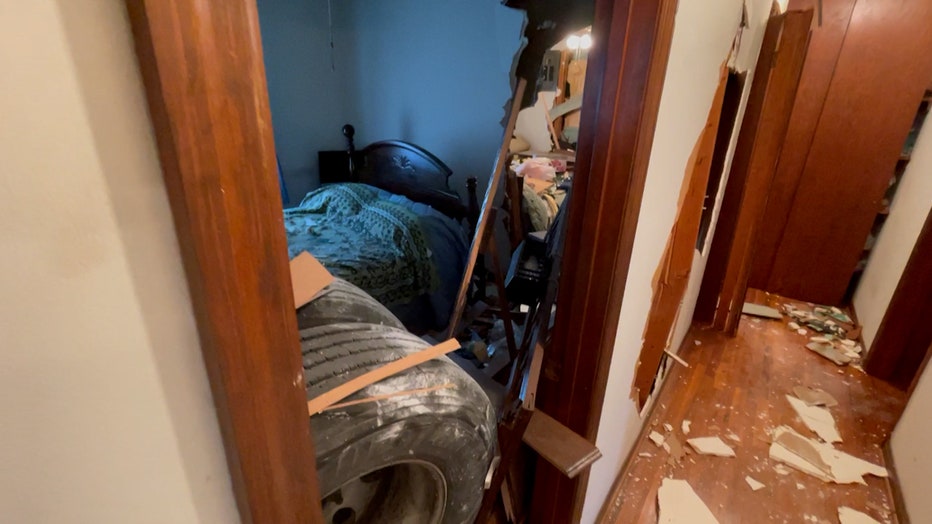 Tires and damage to Ogletree's home

"Something just kept telling me go take your blood pressure, and your sugar and then go fix you something to eat," Ogletree said.

She has lived in the home for more than 50 years. A lot of the furniture is just as old, but now some of it is destroyed or damaged.

The tires narrowly missed the gas line which could have been catastrophic.

"When I got here and saw the damage it was just unreal, she could have been killed," said Barbara Davis.

LaGrange police say a a witness reported seeing the 18 wheeler’s trailer tires breaking off and rolling away from the truck and trailer but didn’t see them crash into the home. The witness was able to describe only the trailer as being white and being a box style.

The good news is nobody was hurt, and Ogletree has already filed a claim with her insurance company.

"It's heartbreaking, but there isn't anything I can do about it," Ogletree said.

Investigators say they are looking for surveillance video in an attempt to obtain more information on the vehicle. It is not clear if the driver knew that the tires broke off at the time of the incident.