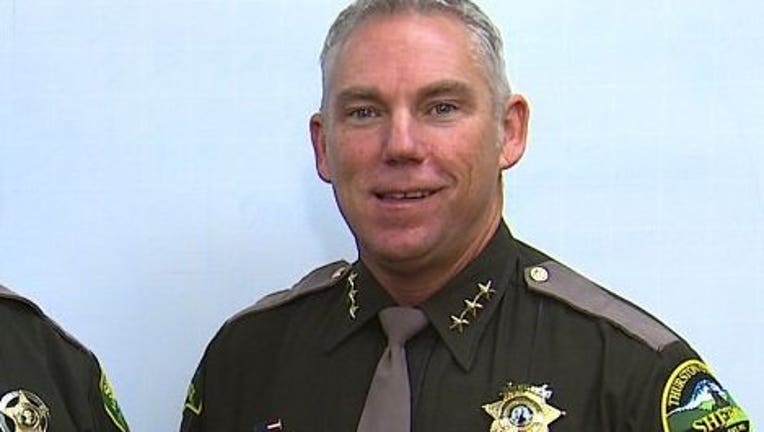 OLYMPIA, Wash. - A judge ruled Wednesday that a petition to remove a Washington state county sheriff from office can move forward after he was accused of not enforcing a state mask mandate during the coronavirus pandemic.

“An absolute, unilateral refusal to honor the legislators and the secretary of the Department of Health is a classic violation of the oath to follow the law,” Dalton said. “So, for that reason, I am granting the petition.”

Dalton was not tasked with deciding whether the charges were true or false.

The statewide mandate requires residents to wear face coverings in public, with a few exceptions, to help limit the spread of COVID-19. Violators could face a fine up to $100 or up to 90 days in jail.

The Thurston County sheriff’s office posted a statement June 24 on social media that recommended everyone follow safety precautions, but said it would not criminally enforce the order. Instead, the department said it would engage with people when appropriate and educate them.

“I’ve been in law enforcement for over 28 years, and for someone to say or mention that I don’t enforce the laws breaks my heart,” Snaza said, adding that his intent was never to not enforce the law, but to educate people first.

Petitioner Arthur West filed the petition and charge with the county auditor on July 2, alleging Snaza’s refusal to perform the duties of his office impeded emergency management by the state and city and the efforts of hospitals to protect the public amid the pandemic.

RELATED: Sheriff tells crowd ‘Don’t be a sheep’ in face of government edict

Senior Deputy Prosecuting Attorney Rick Peters, who represented John Snaza at Wednesday’s hearing, argued that the conduct of his twin brother is irrelevant, and that there’s no evidence he exercised his discretion in a way that indicated he wouldn’t enforce the mask mandate.

West now will have 180 days to file a petition with about 23,000 signatures so the petition can go before voters, according to an auditor’s office timeline. The office would then need to verify the signatures.

Sheriff Snaza would also have the opportunity to appeal.

The coronavirus causes mild or moderate symptoms, but can also be detected in people without symptoms. For some — especially older adults and people with existing health problems — it can cause more severe illness, including pneumonia and death.