Oklahoma State vs. Kansas State is one of the featured matchups on FOX this weekend. (FOX Sports)

A great slate of games highlights Week 9 of the college football season on FOX this weekend.

Coverage begins at 10 a.m. ET Saturday with Big Noon Kickoff followed by a matchup between Big Ten rivals as No. 2 Ohio State (7-0) travels to Happy Valley to take on No. 13 Penn State (6-1) at noon ET. 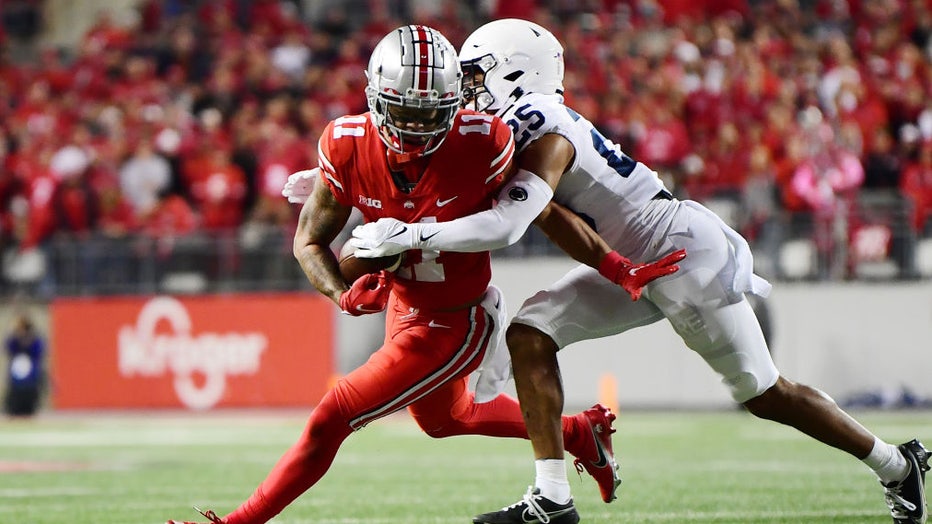 FILE-Jaxon Smith-Njigba #11 of the Ohio State Buckeyes carries the ball against Daequan Hardy #25 of the Penn State Nittany Lions during game at Ohio Stadium on October 30, 2021, (Emilee Chinn/Getty Images)

Ohio State quarterback C.J. Stroud is one of the nation’s best passers, and he’s the first Big Ten QB in history to have three games with six touchdown passes.

The Heisman Trophy favorite will face a formidable Penn State defense featuring a secondary that plays well in man coverage.

The Nittany Lions have broken up a nation-best 58 passes, intercepted seven, and been called for pass interference just five times.

Ohio State and Penn State are ranked in the AP Top 25 for the sixth consecutive meeting. The Buckeyes have won five straight games over the Nittany Lions and nine of the last 11. Fourteen of the 38 games in the series have been decided by a touchdown or less.

Oklahoma State battles Kansas State with the winner of Saturday’s contest putting themselves in a favorable position to claim a spot in the Big 12 championship game.

Cowboys QB Spencer Sanders had two touchdowns in the 4th quarter last week against Texas to help his team rally for the win, and he’ll look to put up points against a Wildcats offense that averages 232.1 rushing yards per game, the 11th-best total in major college football.

The catalyst for that superb running game is Wildcats RB Deuce Vaughn, an explosive runner and game-breaker who will be a challenge for the Oklahoma State defense.

Oklahoma State is ranked No. 1 in the FBS in fewest penalties with 27 through seven games, and they had no penalties last week against Texas for the first time in program history. Kansas State is No. 13 nationally in penalty yardage at 269.