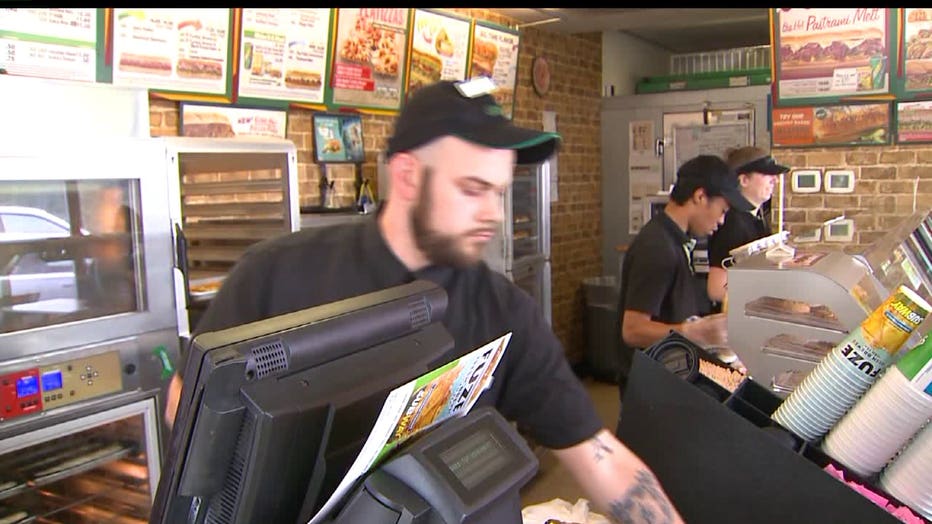 The owner of a single Subway franchise is still considered a big business under Seattle's minimum wage law. (Photo: KCPQ-TV)

SEATTLE -- In 2003, Matt Hollek bought a Subway franchise in Ballard. In exchange for using the corporate name, Hollek pays a royalty to Subway, plus funds his own payroll, rent, insurance and food costs.

Even though Hollek only has eight employees, his shop is considered a big business under Seattle’s new minimum wage law. That means he has only three years to phase in $15 an hour versus seven years for 'small' businesses with fewer than 500 employees.

“I don’t know how I’m going to do it in Seattle. It’s just making it a really unlikely place for me to expand. It’s going to be very difficult,” said Hollek.

He added that he’ll have to raise prices up to $1 per sandwich and scale back health care benefits for his workers.

Chuck Stempler, who owns an Alpha Graphics store in Queen Anne, is one of 600 franchisees planning to file a federal lawsuit, through the International Franchise Association, to stop the wage increase. Attorneys feel the ordinance violates the commerce and equal protection clauses of the U.S. Constitution.

“The fundamental legal problems with the Seattle ordinance are the fact of discrimination and the refusal to treat small businesses the same,” said attorney Paul Clement.

“Subways (franchises) are not your corner mom and pop deli. Furthermore, even if it was, the reality is corporations are calling the shots. Why should we feed that model?” asked Sawant.

“Contrary to what Sawant thinks, I do not make the millions of dollars where I can just reduce my profits and eat this. I don’t make that kind of money. I’m not a Wall Street fat cat and I’m not one of the big wigs she’s trying to target,” said Hollek.

Seattle City Attorney Pete Holmes would not comment on the pending litigation.

The International Franchise Association did not give a target date of when they plan to file the suit in federal court, only saying it will happen “relatively soon.”