It’s been a bumpy road for small business owners as they try to stay afloat amidst the pandemic. Now, they are up against another challenge: licensing issues, as the state-run website is currently down.

TACOMA, Wash. - It’s been a bumpy road for small business owners as they try to stay afloat during the pandemic.

Now, they are up against another challenge: licensing issues, as the state-run website is currently down.

It’s a website you probably have never used, but it’s one of the most important ones in the state of Washington, as it makes sure the businesses you go to daily are in compliance with the state and have the proper documentation.

Without licenses, your regular shops can be shut down. 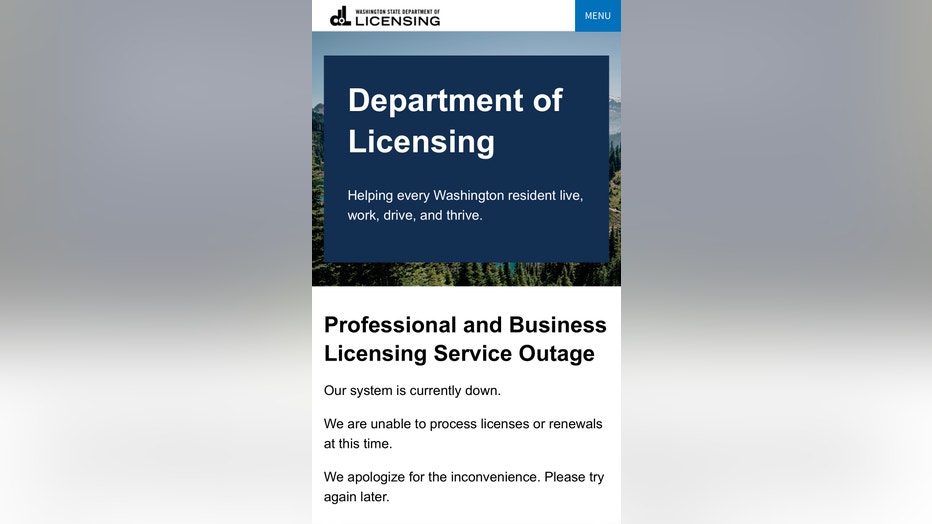 We spoke with Nikki Carson, a real estate agent who has been trying to apply for her broker license and start her own firm.

"Our system is currently down. We are unable to process licenses or renewals at this time. We apologize for the inconvenience, please try again later."—that’s the message Carson sees as soon as she opens the Department of Licensing website.

"It's already challenging enough, most businesses statistically don't last a year, and at this rate though, you're not even going to be able to get started," Carson said.

She started her online coursework, 90 hours' worth, then submitted her certificates to the state to schedule her exam.

She says she submitted everything about a month ago, but her paperwork was under review for about three weeks.

"Then the website just went down about a week ago. It just said ‘Page not found,’ that was for, like, three days," Carson said.

This is where her headaches began.

"Now the website is back up, but it says they're not processing applications or renewals and there's no ETA on the resolution," Carson said as she scrolled through the DOL website.

But it’s not just an issue for real estate agents nor new business owners.

It's an additional hurdle she says she was not counting on.

While she understands COVID continues to cause staffing issues, she says all she wants is some transparency.

"Be honest about what the situation, is that's all I'm asking, because if I had the information, then I could make the correct business decisions for my business," Carson said. "Am I putting this on hold for three months, six months, nine months, and then do what I need to do, financially, to make that work?"

Carson went a step further and emailed Governor Jay Inslee about the ongoing issue and received an automated response.

"We all benefit from the input of interested individuals like you, although the volume of contacts we received does not permit a specific response to every email. Please know that all comments are read and shared with internal staff and agencies as appropriate," Carson says her email reads.

FOX 13 has reached out to the Department of Licensing, who says they’re aware of the issue and are working on it.

We also reached out to Governor Inslee and are currently waiting to hear back.

Now, Carson says she’s forced to have difficult conversations with her family and possibly relocating, if she can’t open her business soon.