The Washington State Office of the Attorney General announced Oct. 19 that it is filing misdemeanor charges against Pierce County Sheriff Ed Troyer over an encounter with a Black newspaper delivery driver.

TACOMA, Wash. - The Washington State Office of the Attorney General announced Oct. 19 that it is filing misdemeanor charges against Pierce County Sheriff Ed Troyer over an encounter with a Black newspaper delivery driver.

According to a statement of probable cause, Troyer faces one count of false reporting and one count of making a false or misleading statement to a public servant.

On Oct. 28, Troyer pleaded not guilty to the charges, the Attorney General's Office confirmed to FOX 13 News.

"Sheriff Troyer entered a not guilty plea because he did not commit the crime," his attorney John Sheeran said. "We look forward to a jury hearing all of the evidence and vindicating him."

The charges were filed in Pierce County District Court. If convicted as charged, Troyer faces up to a year in jail and up to a $5,000 fine.

Troyer is a 35-year veteran of the Pierce County Sheriff’s Office, he had been the agency’s media spokesperson before being elected as sheriff last year. 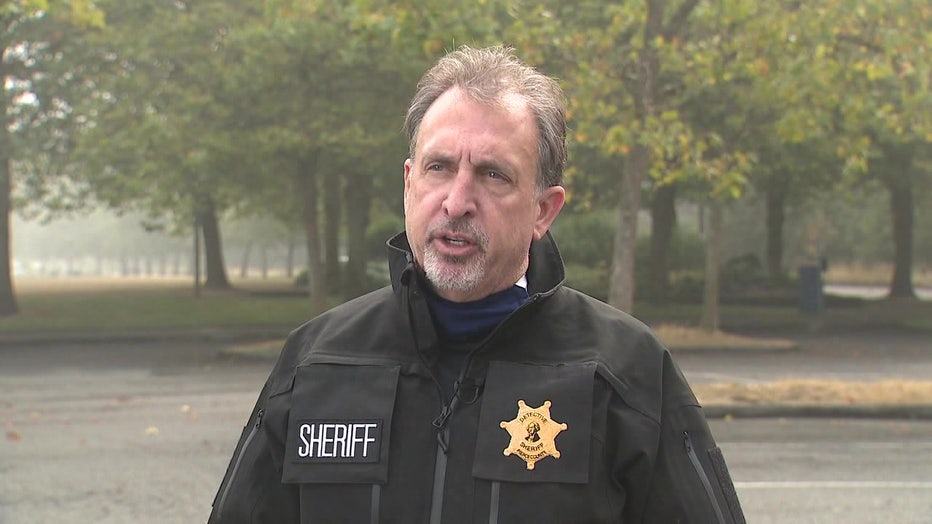 On Jan. 27, Troyer called dispatch and said a man was going from driveway to driveway and appeared to be prowling.

Troyer said he started following him after hearing a noise and seeing suspicious activity in his neighborhood.

Read the probable cause documents below:

"I'm trying to be polite to him, but he just says I'm a racist and wants to kill me," Troyer told dispatch.

Dispatch alerted 19 law enforcement agencies in the South Sound to an "officer needs help" call, prompting 42 units to respond. The massive response was called off after a Tacoma police officer arrived and said "we don't need the whole world here."

Altheimer was detained at the scene.

Pierce County hired an outside investigator to probe whether any potential biases or prejudices took place that night and whether or not Troyer misused his authority as sheriff.

On April 24, the Attorney General’s office opened a criminal investigation into Troyer over the incident. The investigation came at the direction of Gov. Jay Inslee.

AG Ferguson and his office has called media outlets in the area to leak that he intends to file misdemeanor charges against me, your elected Sheriff.

In spite of the fact that he is telling the media, he hasn’t had the professional courtesy to tell me or my lawyer.

This ambush confirms that this is not an independent and fair investigation.  The charge is a blatant and politically motivated anti-cop hit job.  His intention is supported by the fact that numerous times AG Ferguson’s office called the Pierce County Prosecutor's Office and asked for the case. After being denied by the prosecutors office multiple times he asked Governor Jay Inslee to get involved and forcibly take it from Pierce County. I support a fair and independent investigation, this is not it. AG Ferguson’s actions stopped that investigation.

The night of the incident I was doing what I have done for decades—investigate the possibility of criminal activity after neighbors and I had repeatedly become victims of property crime.

At all times, I sought to de-escalate the incident by asking for 1 or 2 units to help.

AG Ferguson has done the opposite and instead has sought to escalate and exaggerate the incident for political reasons and spent tens of thousands of dollars and hundreds of hours investigating a misdemeanor that did not happen. Concurrently Ferguson has not lifted a finger to investigate the theft of hundreds of millions of dollars in unemployment benefits that happened on his watch.

Ferguson is an anti-law and order an anti-cop politician trying to score points for political gain.

This attorney general has taken it upon himself to attack cops because it will get him headlines and further his anti-cop agenda.

Ferguson has spent a huge amount of money investigating an alleged misdemeanor that was not committed but has ignored the crimes committed against cops. We don’t hear of charges against even one person who assaulted officers during the CHOP riots and other related crimes.

Ferguson is trying to defund the police in Pierce County and Tacoma one meritless prosecution at a time. I’m built for this challenge and will fight it to the end.

Ferguson has taken it upon himself to target me.  Ferguson  has done nothing about the skyrocketing Crime across our state. As state attorney general Bob  Ferguson is not protecting citizens he is creating more crime with a false narrative and causing division in our communities and empowering criminals.

Bob Ferguson's solution to crime is charging a 37 year veteran of law-enforcement with no founded or sustained complaints in his career as a criminal.

We can either have a safe community where police are allowed to do their job or we can have the cops handcuffed and the criminals run free.

I ask for your support in standing up to bullies in power.

Ed Troyer said Friday he stands by his call to dispatchers reporting the man did threaten him.

"The Pierce County Sheriff’s Department will maintain its commitment to serving and protecting the citizens of Pierce County while Sheriff Troyer addresses the charges filed against him today. Sheriff Troyer remains the elected Sheriff in full lawful authority and is presumed innocent until proven guilty. The Sheriff has instructed his command staff, and the entire Pierce County Sheriff’s Department to continue in its mission and to fulfill their duties without interruption or distraction."

If Troyer is convicted, the standard sentencing range for both offenses is up to 364 days in jail and up to a $5,000 fine.