State exploring new airport, locals line up to fight it

Puget Sound is growing, and if projections hold local airports won’t meet demand for passengers or cargo for the region.

OLYMPIA, Wash. - Puget Sound is growing, and if projections hold local airports won’t meet demand for passengers or cargo for the region.

The state legislature created the Commercial Aviation Coordinating Commission (CACC) to combat the problem. The group – made up of various interest groups, and locals – have been tapped to determine what options are on the table moving forward.

Expansion of both Seattle-Tacoma International Airport and Paine Field (Snohomish County) is possible, but that won’t keep up with projected demand by 2050 – meaning, a new airport location may be needed.

CACC is expected to give it’s recommendation on a new airport site by June 15, 2023. As it stands, they’ve narrowed their list down to three sites – with people living in those areas pushing back. 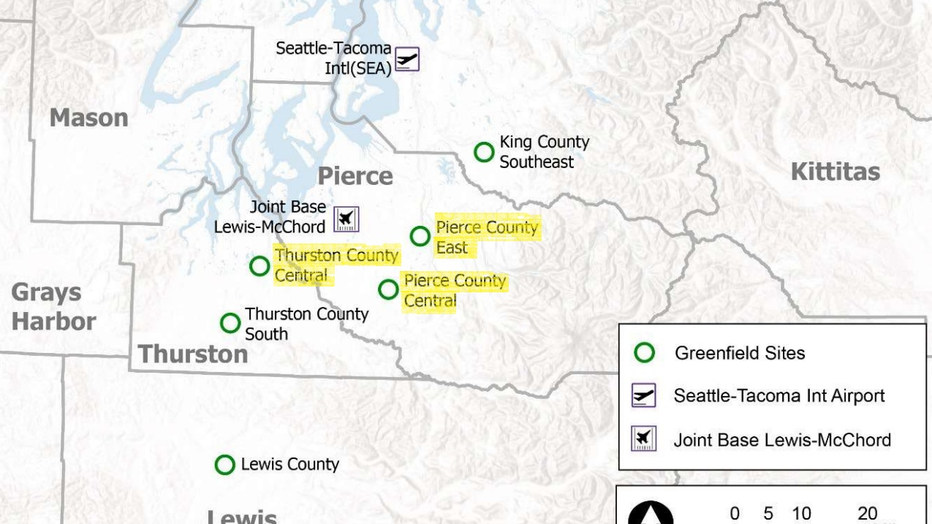 CACC looked at 12 sites as potential places for a new airport, they narrowed it down to the three sites highlighed.

Two locations are in Pierce County: Pierce County East, which is south of Graham, and Pierce County Central, an area just south of JBLM. The third location is in Thurston County south of Lacey – taking up a small part of JBLM.

The Pierce County Council is expected to hear more about plans from the CACC on Monday at 11 a.m. during a regularly scheduled planning session.

The council has already voiced their concerns about the idea of a new airport in the area. A letter, dated October 11th, was sent to both WSDOT and the CACC chair voicing their objections with the inclusion of two Pierce County sites in their planning.

Objections ranged from a lack of transportation, the disruption of long-term plans for the county and environmental impacts.

"It’s a time not to be silent, and to make sure you’re heard," said Jeremy Faust, the owner of Left Foot Farm in Eatonville.

Faust lives inside the projected location for the Pierce County Central site, with the east site just a few minutes around the corner. He told FOX 13 News that he’s not panicking, but he’s taking stock of the situation and making sure that locals voices are heard.

"This is my business," he said. "This is my home. This is my retirement – it’s everything."

Faust runs a farm and AirBNB on his property. He joked that if the airport became a reality it’s more likely his property would become a parking lot – but he’s concerned about what an airport would mean for the area’s way of life, people would be forced out while others would suddenly be living underneath regular air traffic.

"I’m not sure which is worse," said Faust.

In Thurston County, the reaction to talk of an airport just outside of Olympia isn’t getting a warm welcome either.

Hundreds of residents packed a tense meeting in Graham Monday night. They are worried they could lose their homes, farms & wildlife if two proposed sites in rural Pierce County are chosen as a location for a new airport.

On Monday night the group behind stoptheairport.com will host a community meeting at Grace Community Covenant Church beginning at 6:30 p.m. You can learn more information about the event, here.

"This area is a particularly sensitive environmental area," said Sonntag. "A mega-airport here would do major damage to the area, the habitat and to human life."

"We’ve got many people working on this. We’re doing research, writing letters and we absolutely believe there is still time to change course."

While the CACC will ultimately make a recommendation, it’s unclear whether that recommendation will come to fruition. The state legislature would have to make a move, and there are hurdles that would pop up along the way.

Those fighting the airports now say getting their voices heard now is important to ensure that things don’t move too quickly.

According to CACC, overall people seemed to understand that a new airport was needed when they hosted a public comment period.

More than 12-thousand people made comments. CACC said that an online open house showed that 44% of people favored building aviation capacity despite the cost and environmental impacts. The rest of people were split between expansion with mitigation of impact, to ignoring demand and staying the current path.

The numbers shifted when you introduced the actual sites. In a report released in September, the best response they got: a 56-percent "no" in Pierce County. 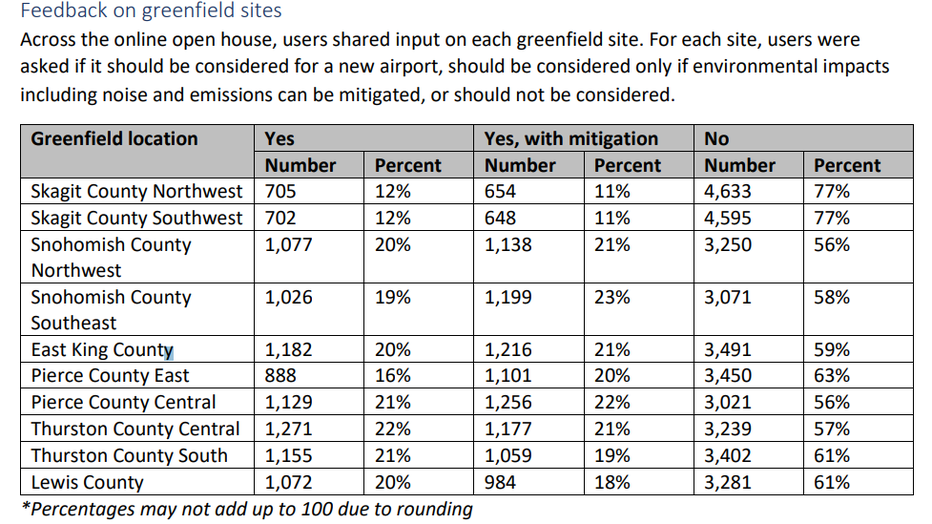 "It might seem like it’s convenient, but there’s a very high price to pay for that convenience," said Sonntag, who believes the numbers may shift even further against the airport. "I don’t think people in favor of the airport are aware of all the costs yet."