SEATTLE -- Police officers who first responded to the June 5 shooting at the Seattle Pacific University campus described a scene of chaos, fear on students' faces, and what the accused shooter had to say after his arrest, newly released documents showed Monday.

When officers got to the campus that day, there was mass confusion about two gunmen with rifles and pistols. They would later learn there was just one man behind the random shooting that left one student dead and another injured.

As calls starting pouring in from SPU, Seattle police realized the severity of the situation.

"As time passed, it was clear this call was much more serious. Multiple victims, and at one point the possibility of multiple suspects," one officer wrote.

Another wrote, "I passed areas from the lobby and north corridor where it was apparent to me that multiple people had been shot."

Officers talked about a hero, later identified as 22-year-old student Jon Meis, who saw the gunman fire and took him down with pepper spray.

"I could hear the male on top also saying that he was holding down the shooter. Officer Smith took control of the suspect on the ground and I moved in and handcuffed him."

The officer went on to say, "I saw what appeared to be a large knife in a sheath on the ground about 5-10 feet away from the suspect." 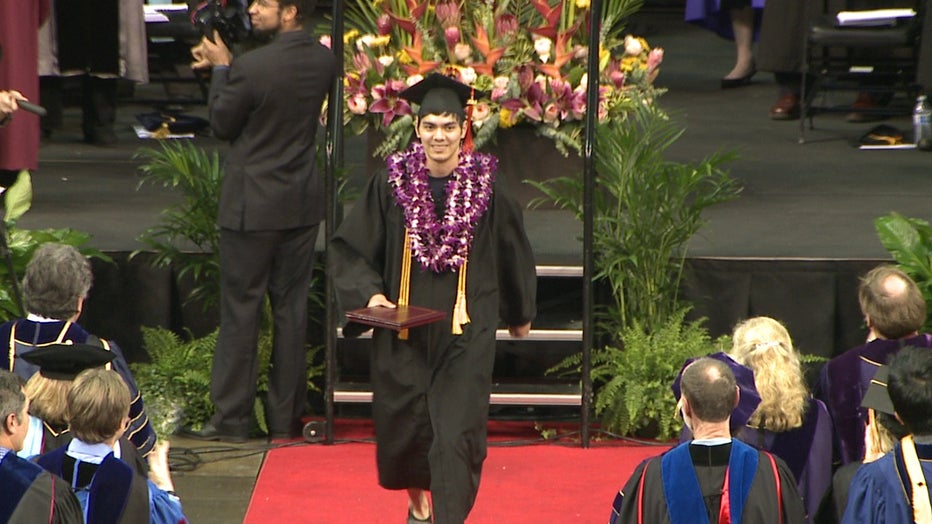 Jon Meis at his graduation from SPU. He was credited with stopping the rampage by taking down the gunman with pepper spray. (Photo: KCPQ-TV)

One officer feared there could be a second gunman while he held and gave medical care to wounded 19-year-old Paul Lee, who would not survive.

"During this time it was not known how many shooters or victims there were," he wrote in his report. "The scene was one of chaos and confusion."

They talk about going room to room, making sure there wasn`t a second gunman. Some of the rooms were packed with scared students.

"Most of the students were sitting down and appeared to have a `dazed` look on their face. I looked on the ground to my right and noticed approximately 30 shotgun rounds on the ground," one officer wrote.

The officers who arrested the man now accused of the shooting rampage wrote that 26-year-old Aaron Ybarra  just kept talking.

"The suspect mentioned that he had been planning the shooting for some time. He told us that he had taken a guided tour of the campus which is when he planned the attack," one office wrote.

"The suspect thanked Officer Smith and me for being nice to him. He said that he expected us to 'beat him.'"

And lastly, the officer wrote, the suspect "indicated he had psychosis and had not been taking

his medications for some time. He said he was not sure if he had been dreaming this incident or if it had been real. He also talked about losing compassion for people over the past year and it seemed he had been planning to do this for some time."

Those police reports will be part of the case built against Ybarra. He has pleaded not guilty to first-degree murder and other charges. His lawyer said his defense will focus on mental illness.

To read the entire General Offense (GO) report that was obtained by Q13 FOX News through a Freedom of Information request, click below.