According to Southwest Airlines, its employees noticed a customer’s phone was left behind after a flight was already boarded and pushed back from the gate.

LONG BEACH, Calif. - One passenger on a Southwest Airlines flight is lucky to have their cell phone back, after receiving help from the plane’s captain and employees.

According to the major airline company, employees at Long Beach Airport noticed a customer’s phone was left behind after a flight was already boarded and pushed back from the gate.

"The Captain immediately suggested that the ramp agents on the ground try to jump the phone up to him so he could return it to the customer. The rest was captured on video!," a spokesperson at the airline told FOX Television Stations.

The video, posted Sunday, shows the pilot hanging from the window, as the phone is quickly passed up to him.

"They didn’t hesitate," Southwest said of its employees on social media. "They quickly passed the phone to its ramp agents, who jumped it up to the captain to get it back to the customer."

The video was posted on World Kindness Day — an international holiday founded in 1998 to promote kindness throughout the world, according to National Today.

"We love seeing the goodwill efforts of our employees helping out a fellow passenger. We are grateful to see our team jumping in to help passengers often!," the spokesperson continued.

And, that’s not the only heartwarming news to come from the airline recently. 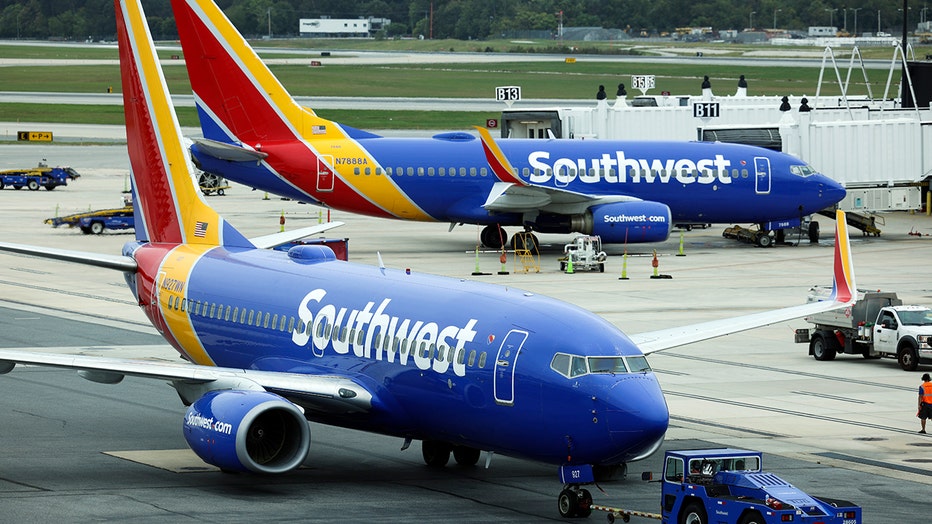 Earlier this month, Southwest pilot Brad Ruff was waiting for the right time to pop the question to his girlfriend, Kristen Pierce, and the right time just so happened to be where he felt the most comfortable – several thousand feet in the air.

"Ladies and gentlemen, if I could have your attention for one second," he spoke into the telephone. "It’s actually the second anniversary of when we started dating, so I just want everyone to look at her and embarrass her for a second."

RELATED: Love is in the air: Southwest pilot proposes to girlfriend during flight

He continued: "And I do have a very important question."

In a video shot by one of the flight attendants, Ruff can be seen walking down the aisle to Pierce, dropping to one knee and presenting a little black box to her.

Passengers applauded and whistled as Ruff and Pierce celebrated the special moment.