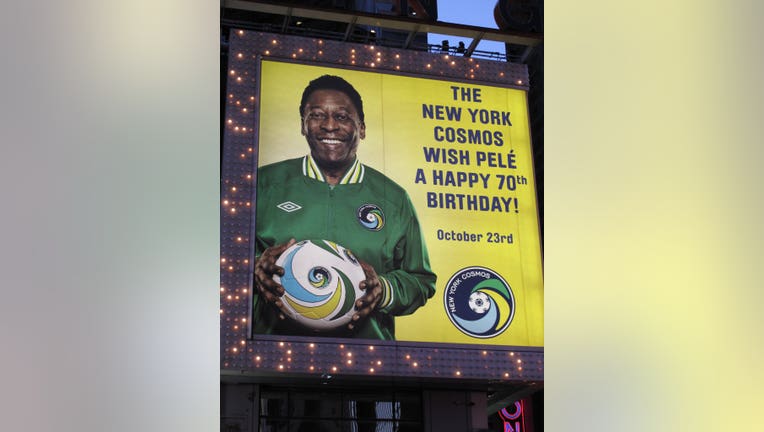 "I was worried, but I never feared I'd die. Because I am from Tres Coracoes, ("I have three hearts"), it will be difficult for me to die," the three-time World Cup winner said. "But my doctor warned me that I very nearly lost one of my hearts back there."

Pele, 74, had been hospitalized since November 24 and had kidney dialysis for several days.

He said he was surprised by the outpouring of love from his fans worldwide.

"I received messages from China, Pakistan, all over Europe," he said "I didn't know everyone was paying attention to my situation."

The athletic icon had one kidney removed during his days as a player, his aide, Jose Fornos Rodrigues, said last week.

"When I went to play at Cosmos, I wasn't feeling well, and the doctor told me I was playing for a while with just one kidney. He said I had both inside but only one working. That's why I had surgery in New York and nobody found out about it," Pele said Tuesday.

Known as "The Black Pearl" and simply "The King," Pele is one of the best known names in all of sports.

He burst onto the scene as a teenager, helping lead his native Brazil to the 1958 World Cup championship. Pele went on to star on two other World Cup title teams as well, in 1962 and 1970, in addition to a breakthrough career with the Brazilian club Santos and later with the New York Cosmos of the now-defunct North American Soccer League.

In 2000, he and Argentina's Diego Maradona were named co-Players of the Century by FIFA, the international soccer governing body.

Santos named him a lifetime ambassador for the club, Pele told fans this week.

"It is exciting to know that I will be wearing the shirt of my favorite team for the rest of my life," he wrote on Twitter. "I expect to keep bringing pride and joy to Santos fans all around the world."

Even after retiring from football, Pele has remained in the public eye as a product pitchman, ambassador for the sport of football and advocate for Brazil's poor, having grown up among them in Tres Coracoes.