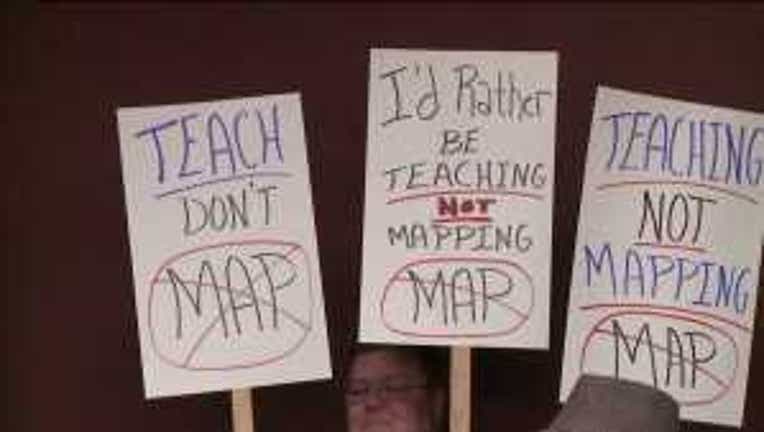 SEATTLE -- The Seattle School District sent a letter Wednesday asking principals to tell their teachers that they will be disciplined if they refuse to give district-required tests, it was reported.

In the past, the letter said, teachers who have refused to give tests have been suspended for 10 days without pay, the Seattle Times reported.

Later Wednesday, Seattle Public Schools Superintendent José Banda said that teachers must give students the controversial Measures of Academic Progress (MAP) test by Feb. 22. Banda suggested that replacements could be brought in to administer the test if staff teachers refuse.

"If we have to bring in additional staff to get the test done, then that`s what we`ll have to do and we`ll deal with teacher behavior at that point in time,” Banda said at a school board meeting Wednesday.

At an afternoon news conference, Banda hinted there would be consequences for teachers who refuse to give the test and suggested their refusal could be considered insubordination. He did not personally elaborate on what consequences the teachers might face.

MAP tests are a series of computerized adaptive tests that measure general knowledge in reading, mathematics, language usage and science.  It is used to measure a student’s progress, but it does not affect a student’s grade.  But some teachers at Seattle's Garfield High School call the test a waste of time, money and resources and object to the test scores being used in the teacher evaluation process.

A group of teachers at Garfield said two weeks ago that they would not give the tests because, they said, students do not take the test seriously and time spent administering it could be better spent on education.  Teachers at a few other schools have since followed suit.

Before the Seattle School Board meeting Wednesday, teachers opposed to the test rallied outside the building.

Banda said he knows the test is not perfect, but added that the district has to use such data to better help students, at least for now, and he announced a joint task force to take a closer look at the MAP  test and the teachers` concerns.

"Through this new task force, we will have the opportunity to explore and review the strengths and the limitations of the MAP assessment and we will consider alternatives to future testing programs for the district," Banda said.

"When something is in place that so many professionals believe so strongly is wrong, it is amazing to me that we are still being asked to do it anyway,” one teacher said.

Banda said the new joint task force will meet twice a month between now and May, at which time they will present their findings to the superintendent.