Seattle Police searching for armed carjacker who looks like The Joker, can't drive a stick shift

Detectives are searching for a group of suspects, including one wearing mask, who stole three cars at gunpoint in South Seattle and First Hill on May 18. Police say in one of the carjackings, the suspects couldn't drive a stick shift, so they had to bail out.

CAPTURED: A 17-year-old and a 16-year-old are in custody, charged as juveniles, for first-degree robbery. Detectives say after the Seattle carjacking spree, the suspects committed an armed carjacking in Tukwila.

They drove the stolen vehicle to Federal Way where they shot up a house. Officers responded and arrested them, despite their attempts to escape. They will be also looking at charges of drive-by shooting, unlawful possession of a firearm and resisting arrest.

The third suspect has been identified as a 14-year-old. He is not currently in custody.

Detectives say tips from the public definitely helped in their identification.

Detectives are searching for a group of suspects who police say stole three cars at gunpoint in South Seattle and First Hill on May 18. In one of the carjackings, police say the suspects couldn't drive a stick shift, so they had to bail out.

According to Seattle Police Department (SPD), at 12:05 a.m., three suspects approached a man at a gas station near Rainier Ave. S. and S. Charlestown St., pointed guns at him and stole his minivan. As the suspects drove away, they ripped the still-attached gas hose from the pump, striking the victim and knocking him to the ground.

Detectives believe the same suspects approached a man late Wednesday evening, just before 11:00 p.m., as he was getting out of the car at 13th Ave. S and S Judkins St. Authorities say the suspects pointed their guns at the victim and demanded keys to the car. They got in the car, but did not know how to drive a manual transmission, so they got out and ran away.

An hour later, the suspects approached a man in a parking lot on the corner of 9th Ave. and James St., pointed a gun at him, and stole his phone, wallet and SUV.

Police are asking for help identifying these suspects. Anyone with information is asked to please contact the SPD’s Robbery Unit at 206-684-5535, or send an anonymous tip to Crime Stoppers through the P3 Tips app on your cell phone, or call 1-800-222-TIPS (8477).

RELATED: Police search for suspect who shot a man at a Seattle RV encampment 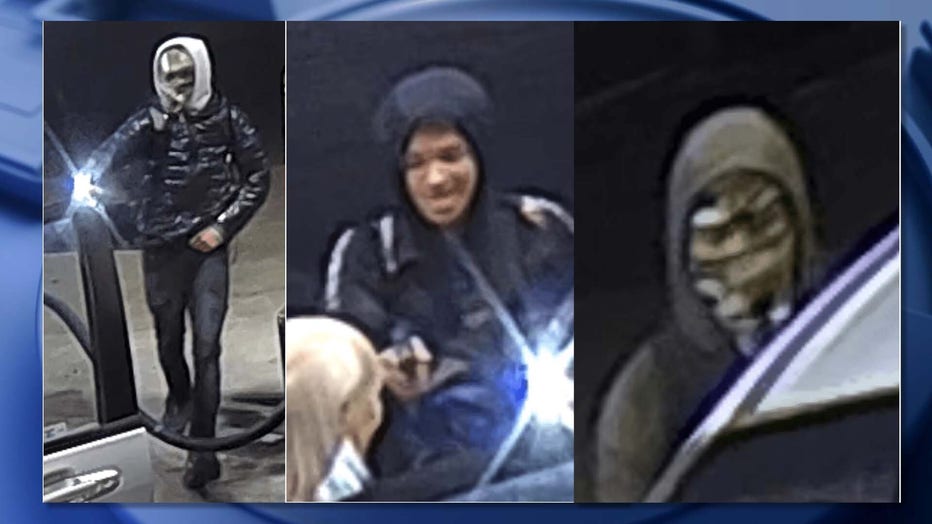