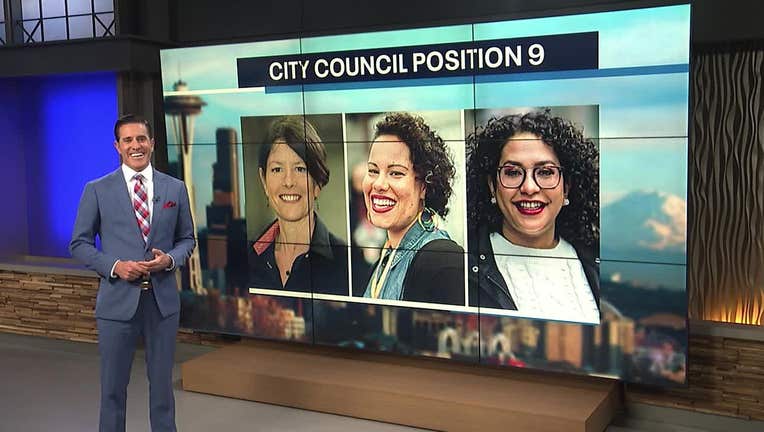 SEATTLE - Voters will decide the future direction of Seattle in the upcoming Aug. 3 Primary Election. The ninth position on the Seattle City Council will be open as Council President Lorena Gonzalez enters the race for mayor.

The three leading candidates in the race have their own approaches to major issues such as homelessness, policing, local business, and political principles of the council.

Lawyer and community organizer, Nikkita Oliver, wants to see Seattle be the progressive city that people all around the nation believe it to be.

Candidate Brianna Thomas, the Chief of Staff to Council President who ran for city council in 2015, says she is the best person to bridge different ideologies.

The third candidate is co-owner of Fremont Brewing and city council aide, Sara Nelson, who also ran for a council seat in 2017.

"I am the best person for this job because I offer pragmatic experienced leadership," said Nelson.

When addressing the growing homelessness crisis, Oliver emphasized how communities of color are disproportionately affected.

"When I think about that we’ve been in a state of emergency around homelessness since 2015," they said. "We have had a housing affordability crisis that’s worsened. And we’re seeing black indigenous communities of color having the most exacerbated crisis."

Oliver emphasized that before the city can get to building affordable housing, Seattle needs to provide short-term strategies to keep people safe and healthy.

Nelson said she would look to other cities that have dealt with the issue for guidance.

"I would put in place a model that works in other cities. Bakersfield. San Diego are two examples," said Nelson. "We don’t need to recreate the will, we need to have the political will to do something different."

"Our not in my backyard attitude has resulted in homelessness being in everyone’s backyard," said Thomas. "And our parks and our sidewalks and our schools. Making sure that we’re moving forward from that attitude because I think folks are ready to pitch in."

Police reform also proved to be a topic of division among the top candidates.

"I do believe that divesting from a failed system of public safety and investing in ones that work is the necessary strategy," said Oliver.

"I believe that defunding police by an arbitrary number picked out of thin air is the wrong way to go. We need good policing not necessarily less policing," said Nelson.

"What we do need to do is take a look at how we are using the police force. Not everything needs to be met with a gun and a badge response. There are many opportunities for community-based responses. But we do have to get response times down," said Candidate Brianna Thomas.

Community opinion of the council's policies has wavered — some question the actions taken by leaders on behalf of constituents.

Nelson contended that the city has become deaf to the spectrum of political opinion among Seattle residents, but Thomas feels differently.

"I think the city council is a body of people elected by the city of Seattle," said Thomas. "If those policies are liberal, that has clearly been the will of the constituents who have put those folks there."

Primary ballots must be postmarked by Tuesday, Aug 3. and the election will decide the top two candidates who will move on to the General Election in November.