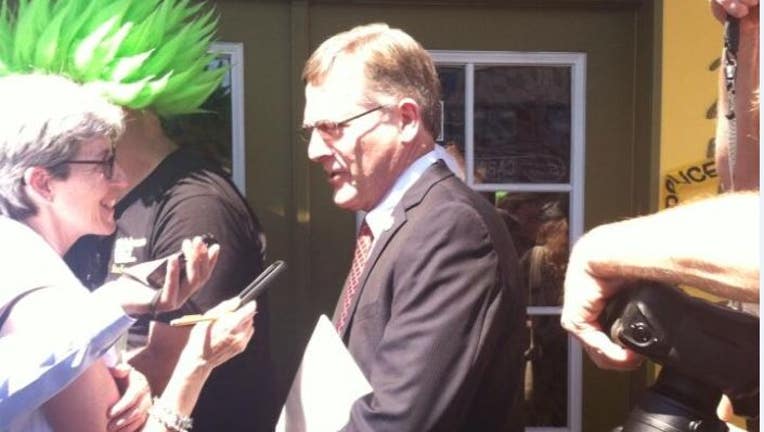 Holmes told Q13FOX News reporter Dana Rebik why he wanted to do it as he waited in line outside the SODO area pot shop.

“The most important take away here is that today marijuana sales became legal and I’m here to personally exercise myself this new freedom,” said Holmes.

Rebik asked if that meant Holmes was buying pot to which he said yes and that he hoped Jenny Durkan (US Attorney) and the DEA wouldn’t mind.

“I bought 2-2 gram bags of OG pearl which was recommended,” said Holmes. “I’m keeping one bag for posterity and one for personal enjoyment at some point when it’s appropriate.”

The first licensed businesses able to sell marijuana for recreational use in Washington State opened their doors Tuesday morning.

Cannabis City is one of two dozen stores statewide which received licenses to sell pot, but it is the only retailer to open in the city limits of Seattle so far.

Despite legalization in the state, pot sale and use remains a crime in the eyes of federal authorities.

“This can happen responsibly,” said Holmes.  “Driving this market this industry this amazingly demanded product into the shadows does not advance public safety.  The best way you can support law enforcement is to make this legal and regulate it and tax it and that’s the message here.”

Rebik asked Holmes if what he had done violated any city policy or ordinance.

“It does not,” said Holmes.  “I am not going to display it give it to anyone else and I’m going to enjoy it responsibly.”

Holmes said he spent $40 and was the fourth person to make a purchase at Cannabis City.

Holmes was elected as Seattle City Attorney in November 2009.