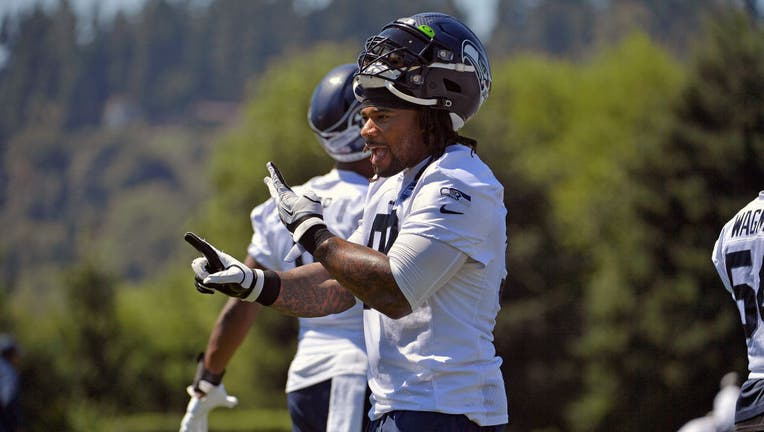 RENTON, Wash. - Whether he’s on the sideline or in the middle of drills, Robert Nkemdiche always seems to have a smile on his face.

Maybe it’s maturity. Maybe it’s a realization that the chance he’s getting in Seattle could be the final opportunity to shed the perception that he’s an immature first-round bust who never matched his potential.

Whatever the reason, this training camp with the Seahawks is exciting and fresh for Nkemdiche.

"For me, it is. It definitely is for me, and I love it," Nkedmiche said. "It’s just special here and I feel like I’m in the right place. I’m grateful to be here."

It’s hard to find anyone associated with the Seahawks who is more enthusiastic than Nkemdiche through the early days of training camp. He bounces up and down the sideline seemingly every practice, yelling and interacting with fans at a distance and playfully hollering at his teammates.

And that’s saying something considering the always youthful Pete Carroll is the head coach.

"He’s a beautiful spirit now. He really cares about having fun and enjoying it. I can’t imagine someone putting a lid on him back in the day. Maybe that’s why some of the stories came out," Carroll said. "Here we welcome the spirit of it and what he brings, and everyone has to get along and fit in and all that. He does, too. I don’t want to harness that kind of love for being outgoing, and expressive and all that. I don’t want to get in the way of all that."

While his personality and spirit can be infectious what ultimately matters is whether Nkemdiche can be productive on the field and contribute to the defensive line rotation. That means moving forward after playing in just 29 games over four seasons and only two since the end of 2018.

Nkemdiche, 26, was a top prospect coming out of Mississippi but his NFL career has been mostly a flop. And there seems to be a realization that this opportunity in Seattle could be one of Nkemdiche’s last chances to stick.

Nkemdiche was the 29th overall pick of the 2016 draft by Arizona. His production was underwhelming, cresting with a career-high 32 tackles and 4½ sacks during the 2018 season. Nkemdiche’s 2018 season was cut short by a knee injury that required surgery and eventually led to his release by Arizona after failing his physical.

Nkemdiche last played in the NFL in 2019 with Miami, where he appeared in two games. He was also briefly suspended by the NFL during the 2019 season for an undisclosed violation of league rules.

Missing the majority of the past two seasons may have ended up being the best thing for Nkemdiche. He missed the game and realized changes were needed.

"It’s never a talent issue. It’s just being consistent and doing it each and every day in practice, to get yourself where he can really show what his true ability is. He’s a really talented kid," defensive line coach Clint Hurtt said.

Hurtt believes the Seahawks can unlock more in Nkemdiche, that the infrequent big moments he had, specifically with Arizona, can become more the norm. When he looked at the film, Hurtt liked the initial burst and how Nkemdiche used his hands. But he added, "there was a lot of refining to his game that I felt like he needed."

Nkemdiche agreed that his game needs to evolve if he’s going to become an established contributor. He can’t have the wild swings in productivity that defined the early parts of his career.

"You guys know. It wasn’t always the case, and it was a direct correlation of my game," Nkemdiche said. "I know it will be better and I just want to make sure I just keep trying to evolve as a player and see what happens."