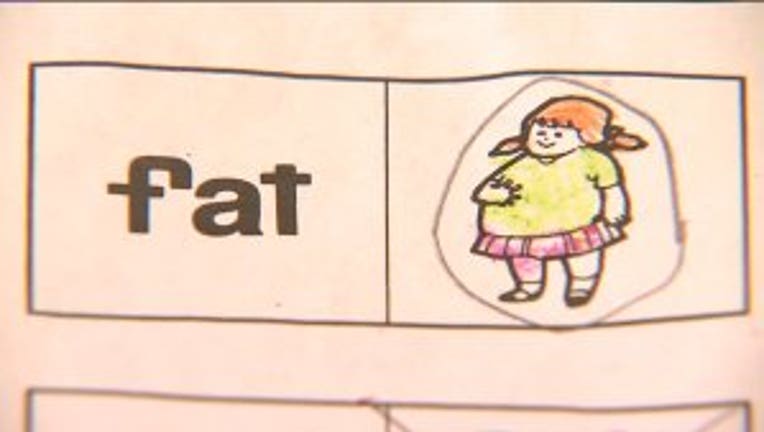 UNIVERSITY PLACE, Wash. -- A school district said Thursday it would pull a student homework sheet after a mom complained its "fat" picture/word identification test was offensive.

The problem began when University Place resident Whitney Smith sat down with her 5-year-old daughter, Saylor, to help her with her homework Tuesday.

"My mouth dropped,” Smith said Wednesday. “I was blown away. I couldn't believe that they would want my kid to pick out the difference between a bigger person compared to a small person.”

But the assignment didn't say bigger or smaller. Kindergarteners from University Place Primary were asked to circle the image that best resembled the word "fat." The correct one involved the cartoon image of an overweight girl.

"I told her she wasn't going to finish it,” Smith said. “I didn't want it finished. I didn't want her looking at it.”

University Place School Superintendent Patti Banks said Thursday that she thought the girl's mother had "a legitimate cause for concern."

"We heard about it when we got a call from a reporter and at that time hadn't had a chance to see the workbook,” Banks said, adding that the district is now pulling the homework from the curriculum.

"We have to figure out how to fix all of our workbooks,” Banks said. “I think there is a legitimate cause for concern here. We know children pretty early on develop concerns about their body, and we don't want to be a part of that.”

"I don't think that image is going to be very upsetting for many children,” Berley said. “I think it's something that as adults in our society, we are much more sensitive to these kinds of issues.”

He said he doesn't think the assignment would lead all children to label others as fat. But, he added, "I don't think we can control what all our children are going to do. What I think is very important is that it becomes part of the conversation that we're having with our children.”