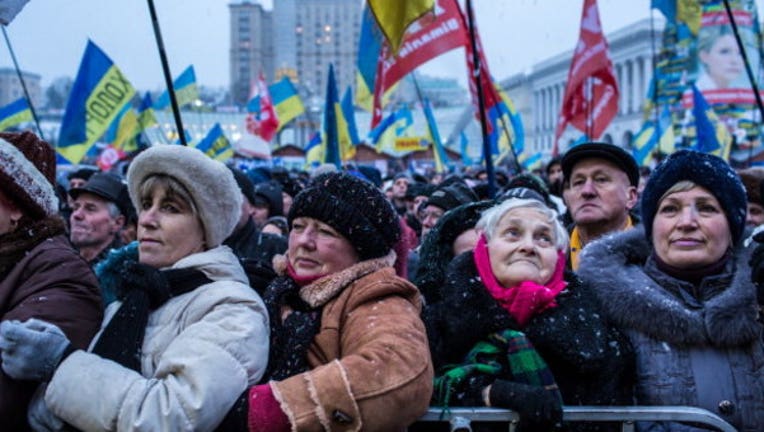 Anti-government protesters rally on Independence Square on December 7, 2013 in Kiev, Ukraine. Thousands of people have been protesting against the government since a decision by Ukrainian president Viktor Yanukovych to suspend a trade and partnership

BRUSSELS, Belgium (CNN) -- Ukrainian Prime Minister Arseniy Yatsenyuk signed the political elements of a trade pact with the European Union on Friday, even as Russian lawmakers finalized the annexation of Ukraine's Crimea region.

The signature of the deal in Brussels, Belgium, signals Europe's solidarity with Ukraine -- and has additional symbolic force because it was the decision of ousted Ukrainian President Victor Yanukovych in November to ditch it in favor of closer ties with Russia that triggered the protests that spiraled into the current crisis.

It comes a day after the European Union and the United States slapped sanctions on Russian lawmakers and businessmen. Russia responded with its own list of sanctions against U.S. lawmakers and officials.

In another sign of defiance, Russian President Vladimir Putin, flanked by the speakers of both houses of Parliament, signed a treaty Friday that finalized the accession of the Crimea region and its port city of Sevastopol to Russia.

The upper house unanimously approved the ratification of the treaty a day after it was overwhelmingly passed by Russia's lower house of Parliament, the State Duma.

Russia's moves to annex Crimea, following a contested weekend referendum in the Black Sea peninsula, have turned a confrontation with Europe and the United States into the biggest crisis in East-West relations since the Cold War.

U.N. Secretary-General Ban Ki-moon met with acting President Oleksandr Turchynov in Kiev on Friday, a day after the U.N. chief traveled to Moscow to speak with Putin.

Ban said at a news conference that he was "very deeply concerned" by the tensions in parts of Ukraine and between Kiev and Moscow. "These are some of the most traumatic and difficult times in the history of Ukraine," he said.

Ban urged a peaceful, diplomatic resolution to the crisis and said all parties should refrain from inflammatory actions and rhetoric. "I will do all I can to help restore good relations between Ukraine and Russia, two brother countries," he said.

He and a small team will meet with Crimean leaders, the head of the Crimean Tatar minority and others including the families of Ukrainian servicemen, the United Nations said.

The United Nations and other organizations stand ready to assist with the country's elections May 25, to help ensure that they are free, fair and transparent, Ban said. He also will meet with Yatsenyuk and other ministers and lawmakers while in Kiev.

Yatsenyuk: EU speaking in one voice

Russia has doggedly pursued its own course despite Western leaders denouncing its actions as a violation of Ukraine's sovereignty and a breach of international law.

Though Russia insists that its actions are legitimate, Ukraine's interim government has said Kiev will never stop fighting for Crimea.

He said Russia's ratification of the treaty annexing Crimea is less important than the EU trade pact he has signed with EU leaders.

"Frankly speaking, I don't care about Russia signing this deal; I care about Ukraine, Ukrainians and our European future. This deal covers more existential and most important issues, mainly security and defense cooperation."

Yatsenyuk said the European Union would "speak in one single and strong voice" to protect its values and defend Ukraine's territorial integrity.

Van Rompuy, speaking ahead of the signature of the deal, said it "shows our steadfast support for the course the people of Ukraine have courageously pursued."

The European Union also confirmed details of the sanctions agreed on by EU leaders late Thursday against 12 Russian officials.

Those targeted with travel bans and asset freezes include Russian Deputy Prime Minister Dmitry Rogozin, as well as the chairwoman of the Russian upper house, Valentina Matvienko, and two Putin advisers.

Van Rompuy said, "Sanctions are not a question of retaliation; they are a foreign policy tool. Not a goal in themselves but a means to an end. Our goal is to stop Russian action against Ukraine, to restore Ukraine's sovereignty, and to achieve this, we need a negotiated solution.

"Europe stands ready to facilitate and engage in a meaningful dialogue involving Ukraine and Russia and supports all multilateral initiatives towards that aim."

He said the European Union expected soon to complete the signature of the remaining parts of the deal, particularly the economic provisions.

Both Van Rompuy and German Chancellor Angela Merkel spoke in Brussels of the need to diversify Europe's sources of energy. This would make the continent less reliant on Russian oil and gas.

In another sign of international solidarity with Ukraine, France is offering to strengthen a NATO air-policing mission in the Baltic area by sending four jets, a Defense Ministry spokesman said Friday.

The offer, accepted by the Baltic states, was made as French Defense Minister Jean-Yves Le Drian traveled to Lithuania, Estonia and Poland on Friday, said Sacha Mandel, the minister's communication adviser.

President Barack Obama is due to meet with other leaders of the so-called G7 group of industrialized nations next week in the Netherlands, on the sidelines of a nuclear summit. Russia has been excluded from the talks.

The new U.S. sanctions announced Thursday target 20 people seen as close to Putin, as well as a bank, Rossiya, believed to serve the President and senior Russian officials.

Shrugging off the claim, Putin said Friday that he would open an account at Bank Rossiya next week, according to the Kremlin.

Speaking at a meeting of the Russian Security Council, Putin said, "As I understand, it's an average bank. I personally didn't have an account there, but I'll definitely open it on Monday."

The individuals named by the U.S. Treasury include major Putin allies, both in the Kremlin and in business. Among the 16 government officials listed are Putin's chief of staff, Sergei Ivanov; the speaker of the State Duma, Sergey Naryshkin; and Viktor Ozerov, chairman of the Security and Defense Committee of the Russian Parliaments upper house.

Four others were named as members of the government's inner circle. They are financier Yuri Kovalchuk, labeled Putin's personal banker by a senior U.S. administration official; magnate Gennady Timchenko, whose activities in the energy sector have been directly linked to Putin, according to the Treasury; and businessmen Arkady and Boris Rotenberg.

Obama also signed a new executive order that authorizes possible further sanctions on what he called "key sectors" of the Russian economy if Moscow does not act to deescalate the situation.

Washington had announced sanctions Monday on 11 individuals over the crisis in Crimea, while the European Union had imposed travel bans and asset freezes on 21 people.

Swedish Foreign Minister Carl Bildt told CNN's Christiane Amanpour that the new round of U.S. sanctions would be "significantly more powerful than the first one."

The latest round "hits significant economic interests that are fairly close to the ruling circles in Moscow. It will be noticed," he said.

Markets were down Friday morning in Moscow, amid a climate of uncertainty in the business community. The ruble was also down in comparison with the dollar and the euro.

By contrast, the markets and ruble rose Monday when the first round of sanctions was announced and did not appear to target those in Putin's inner circle.

The business community now appears to fear that Putin is on a collision course with the West, which could undermine its interests.

Russia's Foreign Ministry said Friday that it had asked Putin to draft some countermeasures in response to the expanded Western sanctions.