SEATTLE -- Seattle police on Monday re-opened the streets around the East Precinct at 12th Ave. and Pine Street in the Capitol Hill neighborhood.

For days, The Seattle Police Department has closed portions of 12th Ave. and Pine St. with fences to keep protesters away from the precinct.

But on Monday, the department said it would re-open the streets in the area and allow protesters to march past the East Precinct.

Here is the text of the email sent to Seattle police officers by Assistant Chief Tom Mahaffey:

To the Women and Men of the Seattle Police Department,

We will have personnel in place should the need arise to swiftly address acts of violence and/or property destruction.

I want to express my sincere appreciation and admiration for your continued efforts to protect this City and one another during this extremely challenging time.

Concrete barriers were being removed around 5:00 p.m. Crews spent the day boarding up the windows at the precinct and putting up some chainlink fencing around the front of the building. 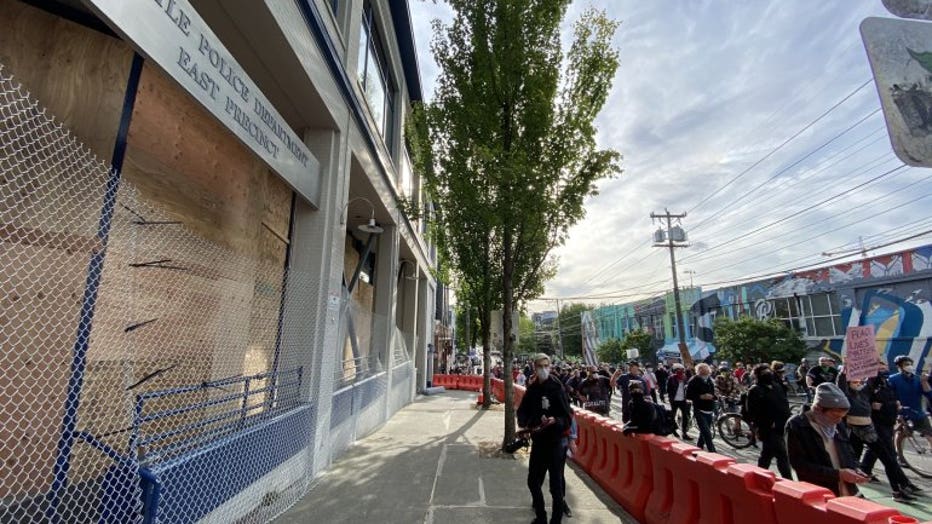 By 6:30 p.m., protesters marched up Pine to the East Precinct.

Earlier in the day Q13 News reported that Seattle police were preparing to abandon the precinct if necessary - by removing any items of value.

In a news conference Monday, Chief Carmen Best called upon the public to remain peaceful, saying that "peace will be met with peace."

Just days after Seattle’s mayor and police chief promised a month-long moratorium on using a type of tear gas to disperse protesters, the department used it again during an overnight protest.

That brought severe criticism Monday from City Council members, including Teresa Mosqueda, who called on Mayor Jenny Durkan to resign.

Council President Lorena Gonzalez said the time is past for mere reform of the police department, and the council must think in a “transformational way” about how the city views public safety and funds police. Durkan’s office did not immediately respond to an email seeking comment.