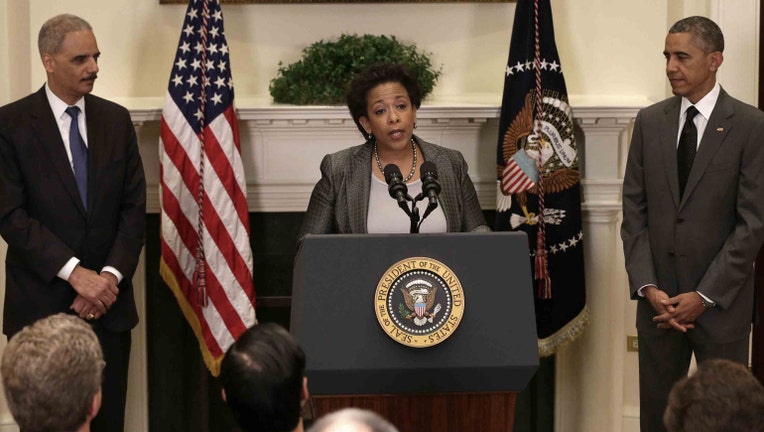 (CNN) -- President Barack Obama on Saturday nominated Loretta Lynch as his next U.S. attorney general, describing the two-time U.S. Attorney for the Eastern District of New York as a "tough, fair and independent" lawyer.

"It's pretty hard to be more qualified for this job than Loretta Lynch," Obama said at the White House, where he was joined by Lynch and outgoing Attorney General Eric Holder.

"I can think of no better public servant to be our next attorney general."

The president said the Senate overwhelmingly confirmed Lynch twice before as a federal prosecutor. "It's my hope that the Senate will confirm her for a third time without delay," he said.

"Loretta might be the only lawyer in America who battles mobsters and drug lords and terrorists and still has the reputation for being a charming people person," the president said.

Lynch, 55, thanked Holder for "leading by example" and "pushing the department to live up to its name."

The first African-American woman to hold the nation's top law enforcement post, Lynch vowed "wake up every morning with the protection of the American people my first thought."

The nominee, when confirmed by the Senate, will replace Holder, who announced his plans in September to step down.

"Ms. Lynch is a strong, independent prosecutor who has twice led one of the most important U.S. Attorney's Offices in the country," White House press secretary Josh Earnest said.

Lynch is a popular prosecutor who is in her second stint as U.S. attorney in Brooklyn, appointed by President Obama in 2010 and also serving in the same post from 1999 to 2001 under President Bill Clinton.

"She has made her name as work horse, not show horse," said CNN legal analyst Jeffrey Toobin, who worked with Lynch as a junior prosecutor in 1990.

"She is someone who tried cases as a junior prosecutor, ran the Long Island office and then was promoted to U.S. attorney for all of the Eastern District of New York. It's a job that is not terribly glamorous, especially compared to the U.S. attorney in Manhattan, but it's a job that she's" done twice, Toobin said.

Lynch would be the second woman to serve as attorney general and the second African-American to hold the post.

Lynch served on the trial team that prosecuted and won convictions in 1999 against New York City police officers for violating the civil rights of Abner Louima, a Haitian immigrant whom police officers beat and sodomized while he was in their custody.

That experience could help at the helm at the Justice Department, which is overseeing high-profile civil rights investigations, including one into the Ferguson, Missouri, police shooting of Michael Brown.

"She's absolutely not a partisan lawyer," said Julie Myers Wood, CEO at Guidepost Solutions and one of Lynch's first hires as a federal prosecutor. "I am a Republican, but she doesn't care if people are Republicans or Democrats. She cares about getting the job done."

In a statement, New York Police Commissioner William Bratton called Lynch "a remarkable prosecutor with a clear sense of justice without fear or favor."

New York Attorney General Eric Schneiderman said in a statement that Lynch "has time and time again demonstrated her commitment to ensuring there is one set of rules for everyone and to defending the principle of equal justice for all."

Her 2010 nomination won Senate approval on a voice vote, meaning Republicans didn't view her as controversial.

In recent months, however, she has led the prosecution of Rep. Michael Grimm, R-New York, for alleged tax fraud. Grimm won reelection this week despite being under indictment, and has called the case against him politically motivated.

Lynch was overwhelmingly approved by the Senate to be a U.S. attorney in 2010, but GOP aides said initially Friday they don't know that much about her. Regardless, the scrutiny she will receive to become the nation's top law enforcement official will be much greater than when she was picked to be one of 93 U.S. attorneys.

Lynch was born in Greensboro, North Carolina, and earned her undergraduate and law degrees at Harvard University.

Sen. Chuck Grassley, R-Iowa, who is poised to chair the Judiciary Committee in the new GOP-controlled Senate, and other top Senate GOP leaders never got word about the expected nomination from the White House, according to aides.

"It'd be nice if the White House called to let us know," one aide grumbled to CNN.

While the administration is not required to inform Congress in advance about Cabinet picks, it is often done to give key lawmakers -- like Grassley and members of leadership -- a courtesy heads-up, or to consult with them and determine whether there would be major opposition.

Sen. Ted Cruz, R-Texas, a member of the Judiciary Committee, immediately said on Twitter that a vote on Lynch shouldn't take place during the lame-duck session and should be put off until the new Congress convenes in January.

"Democratic senators who just lost their seats shouldn't confirm new Attorney General. Should be vetted by new Congress," he wrote.

But another committee member, Sen. Lindsey Graham, R-South Carolina, told CNN's Dana Bash that Lynch "seems to be a solid choice" and is qualified. Graham said he doesn't have any problems with her being confirmed in the lame-duck session, noting that other Cabinet picks have been approved during such periods.

CNN's Ted Barrett contributed to this story from Capitol Hill