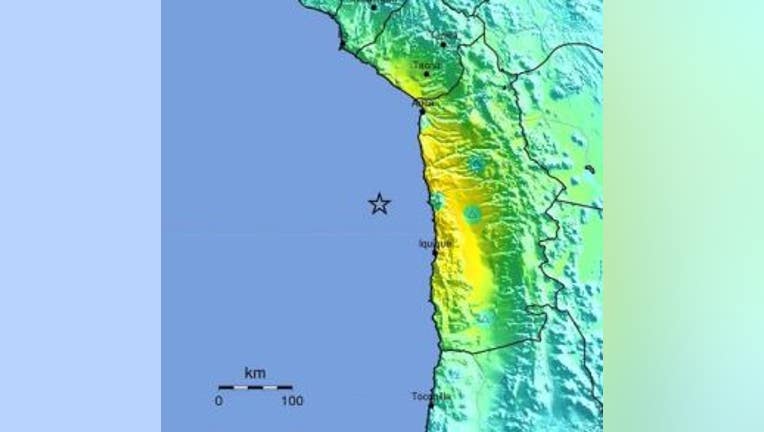 This shake map by the U.S. Geological Survey shows where the quake struck in the Pacific Ocean and the level of shaking that people would have felt. Yellow is the next highest to red.

(CNN) -- An 8.2-magnitude earthquake struck off the coast of northern Chile on Tuesday, generating a tsunami, authorities said.

Four men and one woman died -- some due to heart attacks and some crushed to death, said Interior Minister Rodrigo Penailillo.

About 300 inmates escaped from a women's prison near the northern port city of Iquique in the immediate aftermath, he said.

The U.S. Geological Survey reported the quake, which hit at at 6:46 p.m. local time, was centered some 60 miles northwest of Iquique at a depth of 12.5 miles.

Chile's National Emergency Office tweeted Tuesday night that it was asking everyone to evacuate the  nation's coast.

CNN Chile broadcast video of people in Antofagasta, a port city, walking through the streets as traffic piled up in some places. They appeared to be calm.

"Many people are fearful after experiencing the powerful earthquake in 2010, so they immediately fled for higher ground when they heard the tsunami warning," said Fabrizio Guzman, World Vision emergency communications manager in Chile.

"There have been multiple aftershocks and communications have been cut off in many of the affected areas, so people are waiting in the dark hills not knowing what is to come, and hoping they will be able to return to their homes safely."

The Pacific Tsunami Warning Center on Tuesday night canceled all tsunami warnings and watches, including those for Chile.

"Sea level readings indicate a tsunami was generated. It may have been destructive along coasts near the epicenter and could also be a threat to more distant coasts," the center said in its evaluation.

Tsunami waves of more than 6 feet generated by the earthquake had already washed ashore on the coast of Pisagua, Chile, according to Victor Sardino with the center.

There were no immediate reports of injuries.