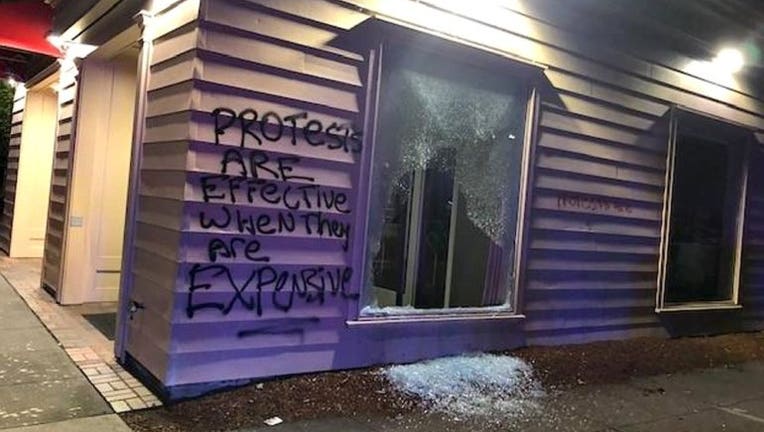 This Friday, June 26, 2020, photo released by the Portland Police Department shows damage after protests calling for an end to racial injustice and accountability for police in Portland, Ore. Some protesters set fire to a police precinct, vandalized

PORTLAND, Ore. - The mayor and newly appointed police chief of Portland, Oregon, on Friday sharply criticized protesters who set fire to a police precinct and vandalized businesses the night before, saying continued violence at protests is preventing the city from moving forward with meaningful reform.

Early Friday, a group of several hundred demonstrators set fire to the North Precinct building while people were inside and barricaded the doors after they were unable to break in through a garage, according to a Portland Police Bureau account of the incident. Police in riot gear used CS gas, a type of tear gas, around 2:15 a.m. to disperse the crowd.

“What happened here is not helping bring about any meaningful change or reform,” Mayor Ted Wheeler said at a news conference held in front of a boarded-up building that had burn marks on the wood. “Last night was plainly and simply about arson. It was about destruction.”

Newly appointed Police Chief Chuck Lovell, who is Black, also criticized protesters’ tactics in a tweet Friday. He said earlier this week that demonstrations have cost the city $6.2 million so far and that cost does not include straight-time pay for officers pulled from other jobs to work at protests.

“Last night’s violence — barricading doors of a building with people inside and then lighting it on fire — is reprehensible & immoral,” Lovell tweeted. “The destruction in & around North Precinct and the Justice Center are senseless criminal acts & costing money that could go to restorative programs.”

Thousands of people have turned out every night for a nearly a month in this liberal Pacific Northwest city since the death of George Floyd in Minneapolis. Most protesters are peaceful, but smaller numbers of people break away most nights and set small fires, tear down fences and statues and clash with police, Lovell said.

The demonstrators involved in the incident Friday morning “were more aggressive and violent than those seen in past weeks,” the Portland Police Bureau said in a statement. At least four people were arrested and one police officer went to the hospital.

The violence overshadowed a smaller rally held Thursday afternoon outside City Hall. The family of Patrick Kimmons, a 26-year-old Black man who was fatally shot by Portland police officers in 2018, gathered along with supporters to demand justice.

Letha Winston, Kimmons’ mother, urged protesters to apply pressure on Wheeler and other elected officials to launch a second review of her son’s killing.

A federal judge on June 9 issued a 14-day court order barring the launching of the riot-control agent except when a life is at risk. The judge extended the temporary order through July 24.