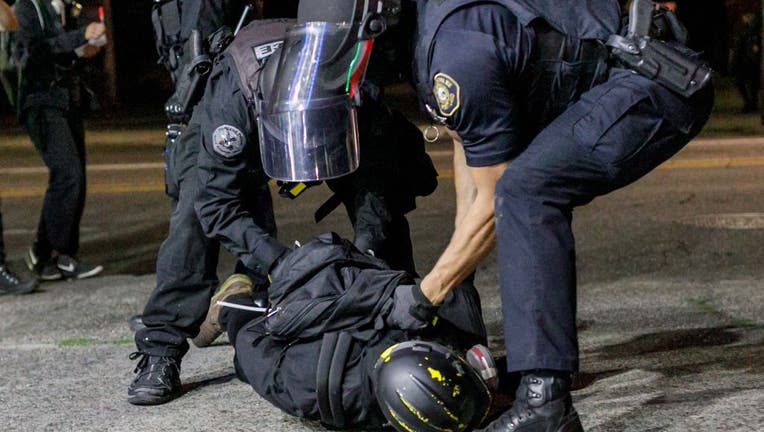 PORTLAND, Ore. (AP) - The top U.S. prosecutor in Oregon on Wednesday rejected a request from Portland’s mayor to end the federal deputation of dozens of police officers as part of the response to ongoing protests, saying it was the only way to end “lawlessness.”

In a joint statement, U.S. Attorney for Oregon Billy J. Williams and Russ Berger, the U.S. Marshal in the state, swatted down Mayor Ted Wheeler’s request and called him out for a “lack of leadership” that they said has allowed acts of violence to overshadow more than four months of nearly nightly protests since the death of George Floyd.

Wheeler said Tuesday that he had asked the U.S. attorney’s office to withdraw the designation that deputized the officers.

Deputizing the Portland officers gives federal prosecutors the option to charge anyone arrested by those officers with federal crimes, which often come with more severe penalties than the state crimes for which local police usually make arrests. It also allows law enforcement a route around Multnomah County District Attorney Mike Schmidt’s decision not to file state charges against hundreds of protesters arrested for lower-level and non-violent offenses, a policy that has angered some in the law enforcement community.

The president said in last night's debate that the sheriff in Portland supports him. There is no sheriff of Portland.

Portland has seen protests almost every night since Floyd was killed by police in Minneapolis. Many of them have ended with some protesters vandalizing police and other government buildings, setting fires, shining lasers into the eyes of police and throwing objects at officers.

Wheeler has declined offers of assistance from federal law enforcement and Gov. Kate Brown, a Democrat, has declined to call up the National Guard. Trump sent U.S. agents from the Department of Homeland Security to guard a federal courthouse in July, setting of two weeks of intense protests and clashes with federal authorities in a two-block area of downtown. Those agents withdrew in late July, however, after a deal brokered by Brown that saw Oregon State Police take over crowd control.

“Importantly, the federal deputation supports front line law enforcement officers and their families in a way that they have not seen from City Hall. Portlanders, and Oregonians in general, are sick of the boarded-up and dangerous conditions prevalent in downtown Portland due to a lack of leadership,” the statement said. “We call upon citizens of this city and state to denounce violence, demand accountability, and work together to end the violence.”

Fifty-six Portland officers were deputized before a rally in the city last weekend by the far-right Proud Boys group. Portland city officials apparently did not know that their officers’ federal deputization status would last until the end of this year.

“A key feature of the designation is that anyone who assaults a federally deputized official could be subject to federal charges,” Wheeler’s statement said. “Fortunately, I am confident the Multnomah County district attorney will continue to prosecute anyone who assaults or otherwise harms police officers or others.”

In an email to the U.S. attorney’s office obtained by Oregon Public Broadcasting, Portland city attorney Tracy Reeve wrote that city leaders had been under the impression that the deputization would end with the termination of the governor’s state of emergency declared only for last weekend’s protests, which ended Sunday evening.

During Tuesday’s presidential debate, President Donald Trump refused to condemn armed militias. When prompted about the Proud Boys, he said: “Proud Boys, stand back and stand by.” The president also referenced the Portland protests in his remarks. 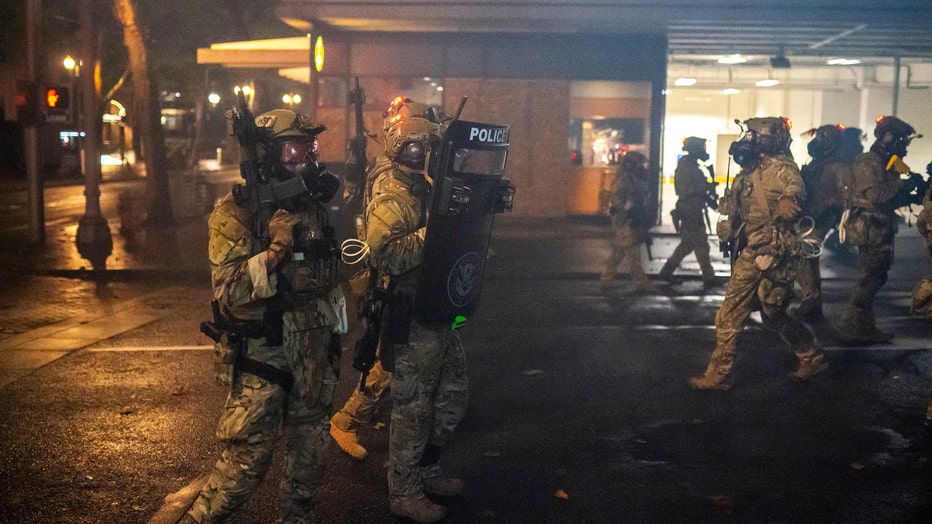 PORTLAND, OR - SEPTEMBER 23: Federal officers disperse a crowd on September 23, 2020 in Portland, United States. Violent protests erupted across the nation Wednesday following the results of a grand jury investigation into the police shooting death o

On Wednesday, Wheeler condemned Trump’s statements on the Proud Boys.

“Yesterday morning, City leaders met with the Western States Center for a training about the history and tactics of white supremacy. We learned about its hallmarks, and how to recognize it,” he said. “Then, last night, we saw it in action when Donald Trump refused to denounce white supremacy, and in his not-so-veiled call for his supporters to engage in intimidation at the polls and elsewhere.”

The Proud Boys have visited the city several times since Trump’s election, often drawing a response from hundreds of counterprotesters. Alan Swinney, a member of the Proud Boys, was booked Wednesday on suspicions of a dozen charges, including allegations he pointed a revolver at counterprotesters and fired a paintball gun and mace at them on two separate occasions in August.

Swinney, who is scheduled for a court appearance Thursday, was charged in a secret indictment Sept. 11 but not arrested until Wednesday. An attorney for Swinney was not listed in court records. Swinney remained in custody Wednesday and it wasn’t immediately clear if he had retained an attorney or would be assigned a public defender.

Authorities said arrests were made after police told protesters not to go on the property of a public safety building and officers towed a vehicle that had shields, helmets, gas masks and paintball guns that demonstrators may have planned to use.

Two juveniles were detained and released and a man was arrested on a charge of interfering with a peace officer, disorderly conduct, trespass and escape, according to police.