CAPTURE UPDATE:
Pierce County deputies need help identifying the last of the three suspects -- the crook in the middle with the purple jacket and gray sleeves.

Detectives say both the suspect behind him in the red hoodie and  the guy in front of him in the maroon knit cap and maroon jacket have been identified and arrested.

"Thanks to the public and some tips, we got some information in that led to the arrest of a couple of people that are suspected in this burglary and the good part is these were really brazen criminals that went into an occupied residence, took a wallet and a gun while the homeowner was there asleep, so this is a group of people who are out at night, doing nothing but breaking into places and stealing weapons, wallets and money and we have two of them off the streets, still looking for the third, but we expect to get him," says Pierce County Det. Ed Troyer.

If you can tell detectives the name of the third suspect, call an anonymous tip into:
CRIME STOPPERS: 1-800-222-TIPS

The surveillance video shows the suspects outside the ‘Up In Smoke’ store on Monday. Deputies say they were able to enter the apartment in the back of the store, where the owner was sleeping -- and that's when they stole his wallet and gun.

"We want these guys caught and taken off the street before they hurt somebody. They’re burglarizing occupied residences and now that we know that they’re armed, that makes it even worse that they’re out in the middle of the night doing these type of crimes,” says Pierce County Det. Ed Troyer.

You can see the suspect in the front. he looks white with at least a moustache, if not more facial hair. He wore a crimson-colored hooded jacket and a ski hat with crimson and white on it that may be a Washington State University hat with that color combo.

Although you can't see the faces of the other two suspects, detectives hope you may recognize their hooded jackets: One's bright red, the other's is burgundy-colored with gray sleeves. 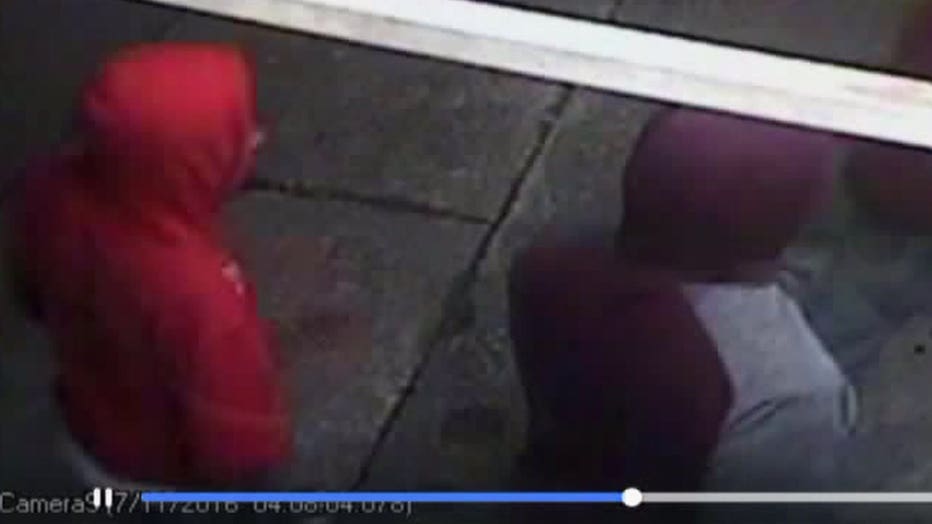