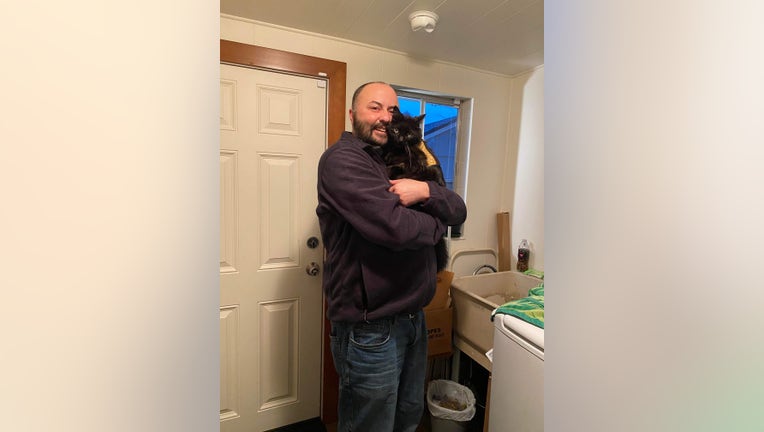 OLYMPIA, Wash. - An Olympia man whose van and cat were stolen in October finally reunited with his feline companion after months apart.

Nick Saviers told FOX 13 he was in the Capital Mall in Olympia on Oct. 26, when his van was stolen with his cat ‘Precious’ still in the back. Police tracked down the van a week later in Tukwila, but Precious was still missing.

Saviers said on Saturday, he was finally reunited with Precious.

After being stolen with the van, Precious reportedly ended up in a neighborhood in South Tacoma, Saviers said, and was taken in by a gracious family. She was still wearing her body harness.

"I guess Precious actually hopped up into a lady's truck and sat on her console," recalled Saviers. "I think she was saying, ‘Hey, take me home!’"

Precious is microchipped, which helped her get reconnected with her owner—Saviers points to dedicated animal-lover Facebook communities that quickly connected the dots back to him.

"A kind young lady took in Precious, including taking her in to get scanned at the local shelter," said Saviers.

Saviers says Precious lost some weight, but is otherwise healthy and is eating and drinking regularly.

Authorities arrested 26-year-old Jade Gibson after identifying her as one of two suspects who stole the van on Oct. 26. Saviers said the other suspect was recently arrested in Oregon.

PREVIOUS COVERAGE: 1 of 2 suspects identified in theft of van, cat in Olympia

"Thank goodness [the suspect is] off the streets. I think I had a close call with him, being just minutes away from finding him breaking into my van," said Saviers. "I'd hate to have seen how that interaction could have gone."

Precious is scheduled for a vet checkup this week.