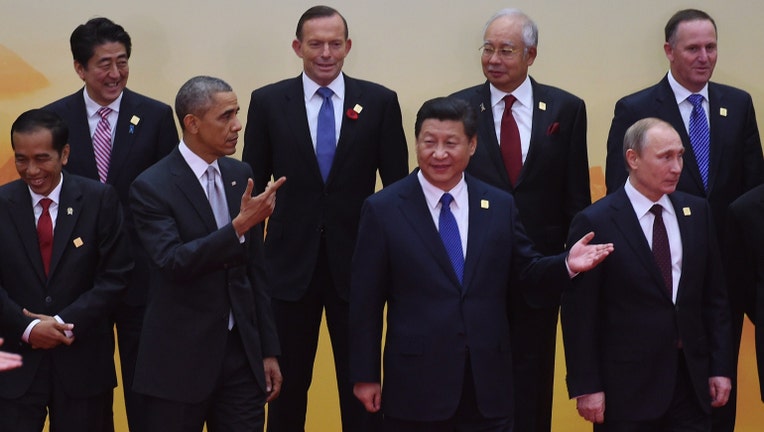 BEIJING -- President Barack Obama and Russian President Vladimir Putin crossed paths Tuesday during a summit of world leaders in China -- but little else.

The world leaders registered just a few chats during the daylong Asia-Pacific Economic Cooperation summit meetings in Beijing despite both flanking Chinese President Xi Jinping throughout most of the event.

"On three occasions throughout the day, for a total of approximately 15-20 minutes, President Obama had an opportunity to speak with President Putin," Meehan said. "Their conversations covered Iran, Syria, and Ukraine."

Those likely won't be the only conversations between the two presidents as they are expected to cross paths again during the G20 summit in Australia later this week.

Obama will also travel to Myanmar during his weeklong trip across Asia and the Pacific.

U.S.-Russia Relations have descended to a new low over the last eight months since Russia meddled in the internal affairs of Ukraine, a NATO ally, and annexed Crimea in March.

That annexation compelled the United States and the European Union to begin imposing sanctions on Russia which have since ratcheted up following Russia's continued support of pro-Russian separatists fighting Ukrainian forces in Eastern Ukraine.

And those tensions came to a head this summer with the downing of flight MH17, which U.S. officials have said was shot down by a Russian-made missile from rebel-held territory in Eastern Ukraine.

Western sanctions have targeted Putin's inner circle in an attempt to pressure the Russian head of state to change his tack.

Russia has not only armed the separatists in the region, but has reportedly deployed Russian military personnel to Eastern Ukraine -- with Ukraine accusing Russia most recently of sending 32 tanks across its border on Friday.

And despite attempts to "reset" U.S.-Russia relations early on in Obama's presidency, relations between the two countries have soured over more than just Ukraine.

The two countries have also been at odds over the conflict in Syria as Putin continues to arm Syrian President Bashar al-Assad's forces and provide diplomatic cover for Iran over its nuclear ambitions.