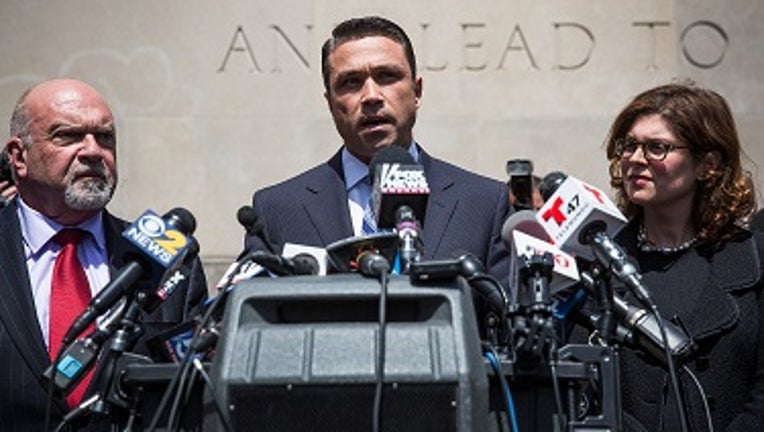 U.S. Rep. Michael Grimm (R-NY, 11th District) speaks at a press conference after leaving Brooklyn Federal Court where he was indicted on 20 counts on April 28, 2014 in the Brooklyn borough of New York City. Grimm's indictments include wire fraud, mai

NEW YORK (CNN) -- Rep. Michael Grimm, R-N.Y., failed to report more than $1 million in sales and wages at a Manhattan restaurant he once ran, using unreported cash to pay workers "off the books" to "evade taxes and keep more money for himself," a federal prosecutor said.

A former FBI agent who used to investigate fraud, Grimm wore a dark suit and was not handcuffed during the hearing.

He was released on $400,000 bond, secured by his home in Staten Island. As conditions for his release, Grimm, 44, must surrender his guns and passport.

He told reporters that he would remain in office while fighting the charges. He's up for re-election in November.

"I'm going to fight tooth and nail ... until I am fully exonerated," Grimm said.

One of his lawyers said previously that Grimm would be vindicated.

An indictment unsealed on Monday after a probe of more than two years alleges Grimm lied to investigators about his taxes after leaving the Healthalicious restaurant to run for Congress.

The charges relate to Grimm's operation of Healthalicious from 2007 to 2010, following his FBI tenure.

He was elected to the House of Representatives in 2010, representing Staten Island and parts of Brooklyn. He was re-elected two years later.

Grimm, as an accountant, attorney, former Marine and ex-FBI agent, "was poised for success as a small business owner," but "made the choice to go from upholding the law to breaking it," Lynch said in a written statement.

Much of the alleged scheme involved cash customers paid at the register, as opposed to credit or debit payments that created a paper record, Lynch said.

The restaurant, in which Grimm had a 45% partnership interest, didn't report some of the cash as income, Lynch's office said.

The restaurant also used cash to pay some workers -- some of whom didn't have legal status --and then didn't report the payments to tax authorities, Lynch's office said.

By under-reporting the restaurant's earnings and workers' wages, the business was able to dramatically underpay its sales, income and payroll taxes, Lynch's office said.

Grimm also is charged with conspiring to commit health care fraud and obstructing an official proceeding.

Grimm said the investigation was "a political witch hunt ... to assassinate my character and remove me from office."

He told reporters that he felt "somewhat relieved" after the investigation because "today at least I get to face my accusers."

The indictment comes months after Grimm made headlines when he was shown on camera threatening to throw a reporter over a Capitol Hill balcony after an interview following the State of the Union address.

In recent months, public attention also has focused on Grimm's campaign donations after a friend and donor was charged with funneling illegal contributions to his campaign four years ago.