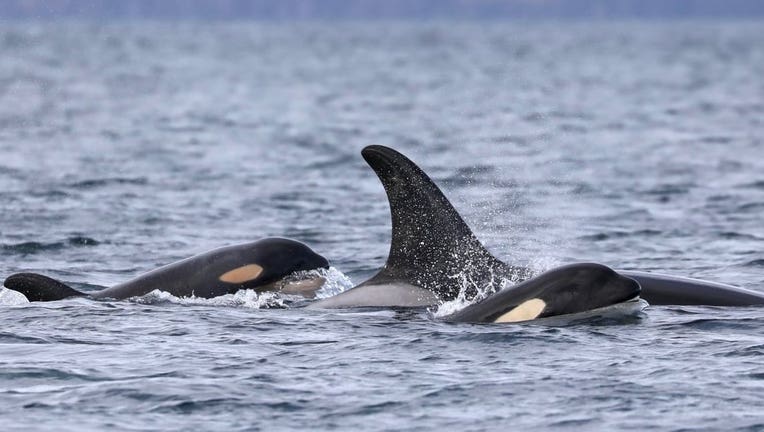 The Center for Whale Research said the images were taken on Monday. Two of the orcas spotted include recent additions to the J pod: J57 and J58.

See more photos from the Center for Whale Research here.

Back in September, the Center for Whale Research confirmed that another baby orca has been born to a pod of endangered southern resident orcas that frequent Puget Sound.

It was the second calf born this month for J pod, according to director Ken Balcomb, who confirmed the birth to Q13 News.

J35, the orca also known as Tahlequah, gave birth to a male calf on Sept. 4. Tahlequah raised global concern in 2018 when her new calf died and she carried it for 17 days and more than 1,000 miles. There are now 74 southern residents in the J, K, and L pods. Threats to their survival include boat noise and vessel disturbance; pollution; and lack of food, especially chinook salmon.

The birth of the newest baby was witnessed by professional naturalists Talia Goodyear and Leah Vanderwiel, along with customers aboard the Orca Spirit Adventures vessel Pacific Explorer, according to a news release from the Pacific Whale Watch Association.

The second birth to J pod in just a few weeks is “certainly cause for celebration,” said Deborah Giles, biologist for the University of Washington’s Center for Conservation Biology. She leads research on the orcas’ scat, which holds key information on their health. “This is just exactly what we need in 2020.” The endangered orcas that return to the inland waters of Washington state every summer are genetically distinct from other killer whale populations around the world. They primarily eat salmon, rather than seals or other marine mammals.

This year, however, visits from the southern resident orca pods have been scarce in the Puget Sound.

The local orcas struggle with a lack of chinook salmon, their preferred prey, as well as toxic contamination and vessel noise.