A streak of sweltering heat spreads across the East on Saturday as sizzling-hot temperatures settle in for New York City. It's the first chance at 90 degrees for many major East Coast cities.

Record-shattering heat has been baking the South for days, and now it's the East Coast's turn to feel the sweltering hot weather.

It's all due to a strengthening Bermuda High, a ridge of high pressure that becomes anchored in the Atlantic Ocean near Bermuda and usually lingers in the region for most of the summer. That area of high pressure can also affect the track of hurricanes if and when they develop in the ocean.

Temperatures of 20 to 30 degrees above average are expected across the region, with many areas seeing highs in the 90s from the mid-Atlantic and Ohio Valley into the Northeast and New England.

Most of the extreme heat will be confined to the Ohio Valley and mid-Atlantic.

The good news for the South: Some relief is on the way in the form of a cold front that will help to bring temperatures closer to average on Sunday. However, that's not the story for the East, as nearly 100 more record highs are forecast to fall as the heat begins to sizzle in the region.

The National Weather Service has issued the Northeast's first Heat Advisories of the season from parts of New England to the northern mid-Atlantic, where the heat index is expected to climb into the upper 90s to near 100 degrees on Saturday and/or Sunday. 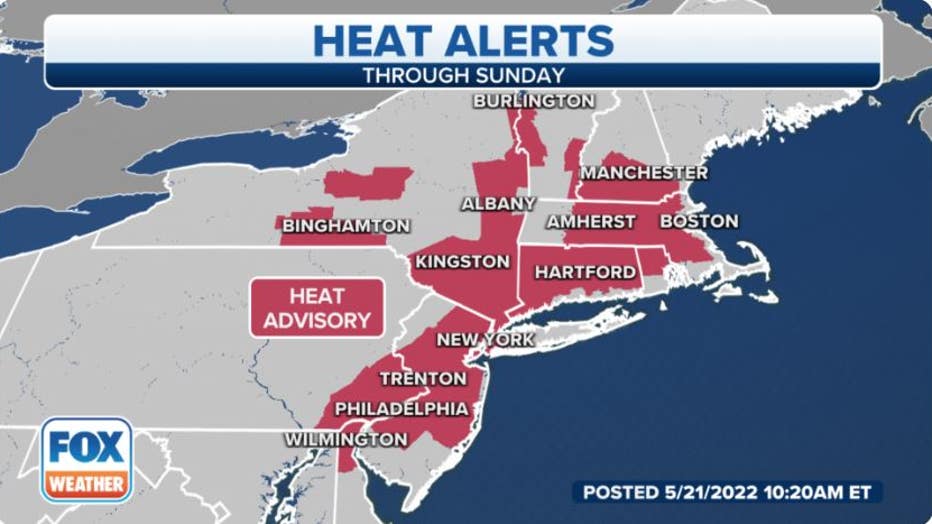 Heat Advisories are in effect for parts of the Northeast. (FOX Weather)

To give an idea of how rare it is to have Heat Advisories issued in May in the Northeast, the only NWS office in the region to issue this alert in May since 2006 is Philadelphia/Mt. Holly, and that was more than 10 years ago.

NWS offices in Boston, New York City, Albany, New York, and Burlington, Vermont, have no history of the issuance of Heat Advisories in May since at least 2006 – until now.

HOW THE WEATHER YOU'RE ACCUSTOMED TO AFFECTS NATIONAL WEATHER SERVICE HEAT WARNINGS, ADVISORIES

Many locations in the Northeast could have their first 90-degree day of the year this weekend, and a few locations in the Carolinas could reach the century mark on Saturday when the heat will become extremely dangerous across the region.

WHAT IS THE HEAT INDEX AND WHY IS IT IMPORTANT TO YOUR HEALTH? 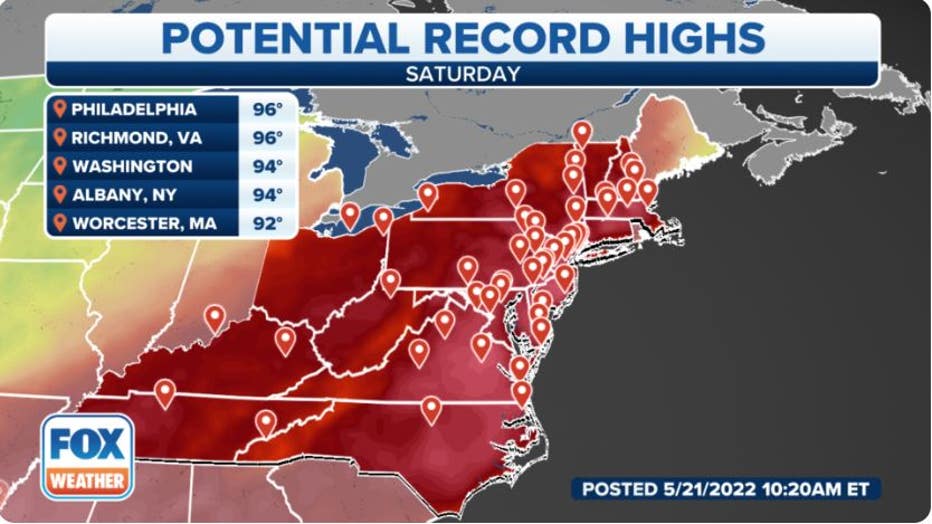 Every marker you see on the map above is a location that has a very good chance of breaking a record on Saturday – and there are dozens of them. (FOX Weather)

Philadelphia has a good chance of getting very close to 100 degrees, as does Richmond, Virginia, and parts of interior New England. 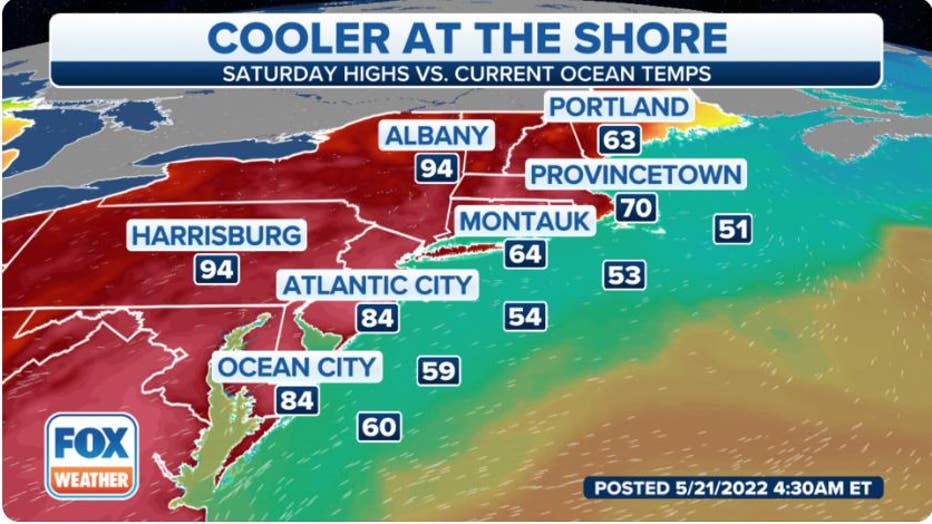 Cooler temperatures will be confined to the coast on Saturday. (FOX Weather)

It's very early for excessive heat to affect the region, so anyone living and working in the Northeast and New England should monitor conditions and take precautions now to ensure you can stay cool as the heat rises.

This heat will be short-lived. A cold front bringing severe thunderstorms to parts of the central and eastern U.S. through the weekend will drop temperatures back down to seasonable averages by early next week.