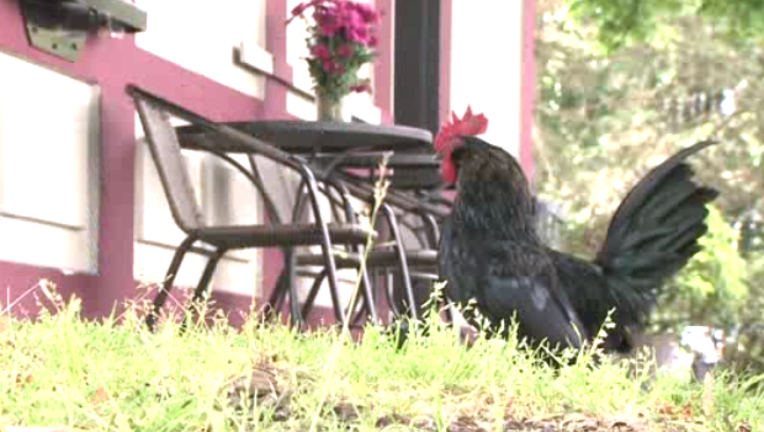 ISSAQUAH -- McNugget, a beloved bantam rooster known to frequent an Issaquah parking lot and espresso stand, was killed Tuesday night by a neighborhood dog that escaped its residence.

"It's so sad," said Your Espresso stand owner Michelle Schneider. "My customers have been bawling all morning."

McNugget has been a fixture and tourist attraction in Issaquah ever since it escaped a grain supply store 13 years ago and made its  home in the parking lot. The rooster, known to split its days between the coffee shop, parking lot and nearby Staples store, was the feature of many media pieces, including one by the Seattle Times.

Schneider said she received a call from one of her well-known customers late Tuesday night, saying she saw a neighborhood dog carrying the dead rooster in its mouth. The dog, Schneider said, is also well-known in the neighborhood, and had apparently escaped its house while it's owners were out of town.

Schneider says no one was at fault in McNugget's death, and it appeared to be a tragic accident.

The "famous" rooster was a favorite attraction for many Issaquah residents, Schneider said, and known for it's dog-like attitude. It would often fly up to the espresso counter and peak his head in for treats, and reacted to commands like a well-trained dog.

McNugget's coop outside of the espresso stand has turned into a makeshift shrine as people learn of the news, Schneider said. One woman, who usually comes to feed the favorite rooster every three hours, was nearly inconsolable.

Schneider said the rooster was one of a kind, and wanted to remind people that he chose to live among the people of Issaquah. She encouraged well-meaning customers to keep their own roosters at home, saying that they will miss McNuggett, but he can't be replaced.

"We don't need people dropping off their chickens and roosters," she said. "They mean well, but we don't need that."

R.I.P McNugget. We'll see you in that big chicken coop in the sky.