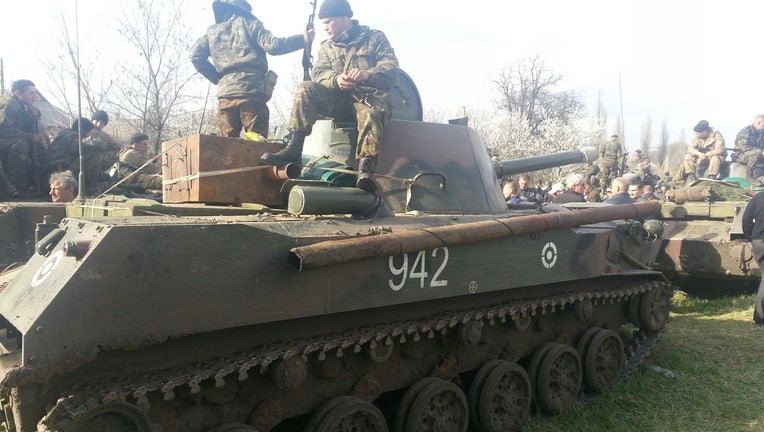 A Ukrainian Army is unit surrounded and stopped by locals on Wednesday, April 16, 2014 just south of Kramatorsk, Ukraine. (Courtesy CNN)

(CNN) -- "Chilling" leaflets warning Jews to register and document their property with the pro-Russian government that has claimed power in the eastern Ukrainian city of Donetsk are "the real deal," the U.S. ambassador to Ukraine said Thursday.

Geoffrey Pyatt told CNN's "The Lead with Jake Tapper" that a respected Jewish leader in Ukraine showed him a photograph of one of the leaflets. It was not clear who was behind the flier, which warned Jews that they face deportation or loss of citizenship if they fail to register.

"All citizens of Jewish nationality over age of 16, living on territories of Donetsk People's Republic, have to register with DPR commissioner of nationality before May 3rd, 2014 at the Donetsk Regional Administration, room 514, registration fee is $50," the leaflet reads, according to a CNN translation of the document. "Must have in person $50 cash, passport, all available IDs, and documentation of ownership of real estate and transportation."

A statement from the Jewish community in Donetsk said the fliers bore the signature of "People's Governor" Denis Pushilin, the head of the self-declared "People's Republic of Donetsk." But Pushilin denied any connection to the leaflets, calling the incident a "clear provocation."

Pushilin told CNN the handwriting on the flier wasn't his, and the title attached to his name was not one he uses. And the Jewish community in Donetsk said the act "smells like a provocation."

The reports come as Ukraine's Western-backed interim government has been struggling to contain uprisings by pro-Russian political movements in several eastern cities.

The fliers were handed out by masked men on Tuesday, during the Jewish holiday of Passover, in front of the main synagogue in Donetsk, the Jewish community statement said. The men also hung posters with the same message, it said.

"Who is behind this is an open question," Rabbi Pinkhas Vishedski said in the statement. But he said the act was a provocation "and should be treated accordingly ... full stop and end of topic."

Pyatt said radical groups may be trying to stir up historic fears or create a provocation to justify further violence in eastern Ukraine.

"It's chilling. I was disgusted by these leaflets," Pyatt said. "Especially in Ukraine, a country that suffered so terribly under the Nazis, that was one of the sites of the worst violence of the Holocaust. To drag up this kind of rhetoric is almost beyond belief."

But in Kiev, where the Jewish community is a vital part of political life, there is "no sympathy for this approach," he said.

"It's almost inconceivable that this kind of thing could be happening in the 21st century," Pyatt said.

U.S. Secretary of State John Kerry also cited the leaflets during a news conference in Geneva, following emergency talks on the situation in Ukraine. Kerry called them "grotesque" and "beyond unacceptable."

"Any of the people who engage in these kinds of activities -- from whatever party or whatever ideology or whatever place they crawl out of -- there is no place for that," he said.

All parties at the Ukraine talks unanimously condemned anti-Semitism and other forms of religious intolerance, Kerry said.